I began work on a new piece after the preparation of the support. 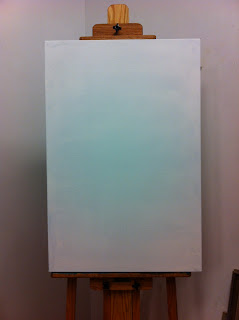 After a light sanding, I placed the canvas on my favourite new easel and got prepped to do a little prep work on a new image.I measured out around the canvas to create a frame to draw inside of. I learned in previous works to leave a bit more space for framing. Often I would draw my image too close to the edge, now I'm planning ahead. 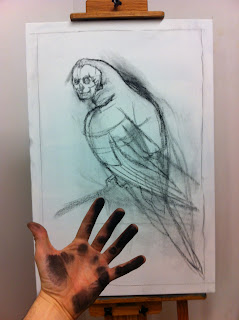 I drew in my image with charcoal in one go straight on the canvas without measuring etc. Give a little rub here and there to help build up the forms. Afterward, I give a quick spray with the ever so noxious chemical fixative, but not enough to cause too many fumes I have to leave but probably just enough to give me partial brain damage ;P 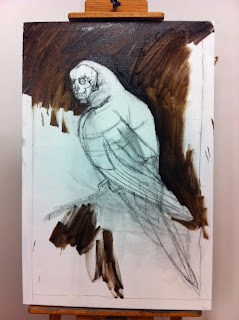 Using a brush, I slathered on some Bob ross brand Van Dyke brown and scrubbed around the edge. I worked loosely and went around the sides of the canvas so there would be a little colour on the sides and to give me a middle tonal range to work on rather than blaring bright white. 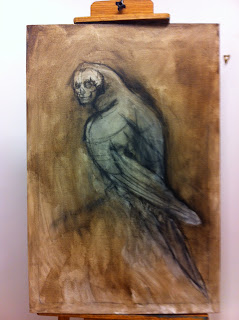 I used the paper towel from drying my hands after washing off all the charcoal to rub the brown over the rest of the canvas. I also wiped out areas where lighter colds will be when I do the next stage. I will let the image sink in. Already, I think I will make the face skull a bit larger on the birds body when I next visit the studio.
Posted by BUNNY at 22:13