The sound of one hand clapping

Closing reception tonight 7 - 8 pm.
For my UAS + 15 window exhibition. It has been a long haul trapped in the airless, hot little fishbowl of a window. 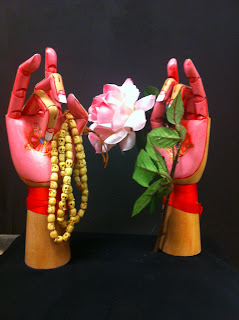 am a week away from finishing the production portion of this project and then I'll move into two weeks of post production. I sent the rough cut off to render last night and it is a beast, my After Effects ended up crashing.

1 day drawing workshop with Martinho Correia at the Calgary School or Art.

This workshop will introduce students to the principles of portrait drawing in the realist tradition. Concepts to be covered include: measuring and proportion, planes and forms as well as values and shape design. The goal of the class is to give students an understanding of the traditional approach to creating an accurate and beautiful portrait. 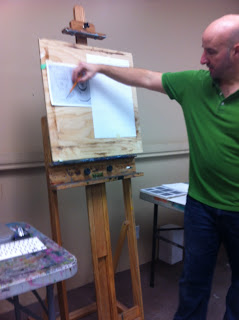 The workshop began with an introduction to the Bargue drawing book and method. We were given a hand out to use as reference. Though there wasn't enough time to correctly make the drawing we got a start in on the method. Ususally a drawing like this can take about two weeks to finish. 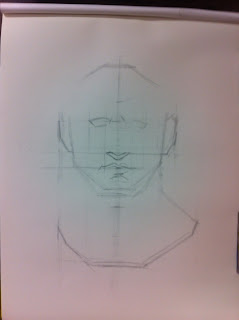 Here is the start. I used a bamboo stick to get the relative size of elements starting from the plumb line down the center then finding the outer edges by using fractional measurements and their relationship to one another. 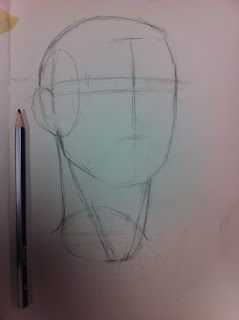 After the break we learned about the many elements that make up the head and face. We drew a head at a slight turn and began building this "realistic" face by relationships, not by referencing any actual person to give us a practical idea how the elements fit together in relation to one another. How the brow line in the top of the ear etc. 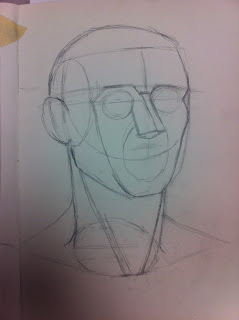 We blocked in more features as if they were basic solids onto the planes previously created. The mouth are as a shape that is similar to a half slice of an orange. 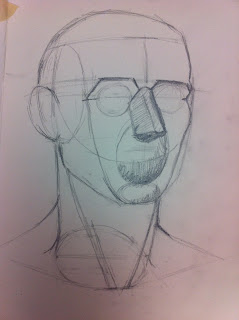 We added a bit of shading to accentuate the masses in the shapes on the planes of the face. 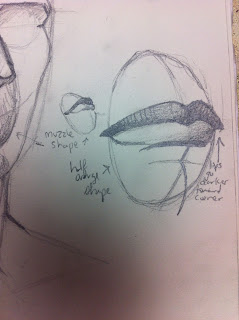 We used the muzzle shape and a starting point to create the protrusion of the lips on the face. This exercise helped teach how the shadows fall on the curving surface of the lips and how they sit. 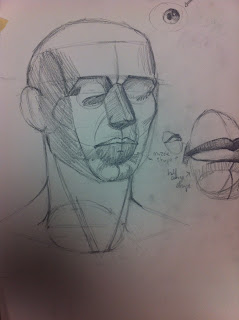 We described more areas on the face with some directional shade lines. 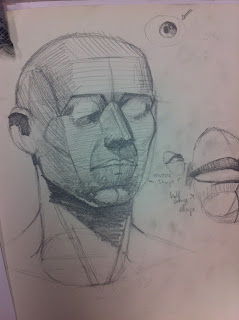 More lines and shadows were added on our make believe practice head while we studied the finer points of its construction relative to some of the handouts we were given as reference. I like the eyeball in the upper right and how it describes how light and shadow fall on the iris. 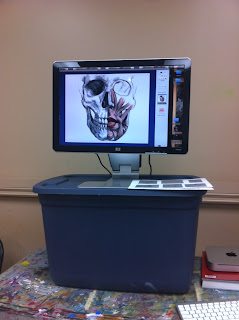 I loved this reference image of how the muscles sit on the skull to create some of the movements of the face. Also note the workshop set up. Nice. 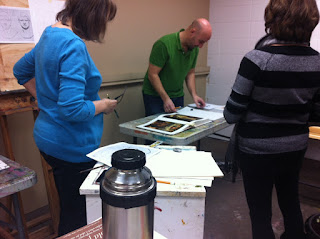 Martinho showed us some great exercises for drawing shapes off of old masters works in tracing paper. Then the aim is to try and replicate it exact by freehand. Every now and again putting the tracing paper over your drawing to see if you are accurate. 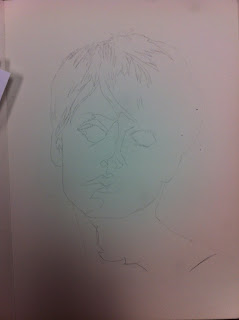 We used a transfer method to draw in a portrait to describe and break down the basic shapes of the face as well as challenged to draw in the models eye that as completely in shadow inthe reference photo. 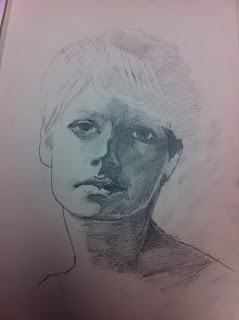 Here I have built up the basic shadow. My eye placement seems off now that I look at it again days later. Damn.  At any rate, i begin describing the planes by directional shading. 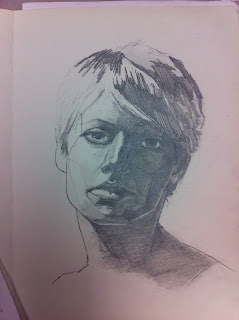 I blocked in the major planes of areas of light and dark. and described with line the simplified major planes of the face. We reached the end of the class and it was very inspiring if not a huge challenge in a short period of time but it gives me the gears to see differently and set forth on my continued path to improving my artistic practice. It feels like there is still such a long, long way to go.

In my studio I created some apples out of styro-foam balls from the dollarama. I coated them in a base coat of red acrylic paint and pierced them with a toothpick. 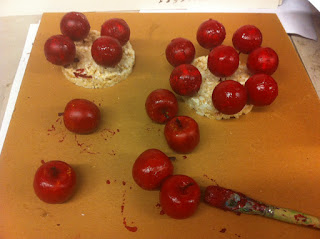 In order for them not to get suck to a surface while they dried I invented another use for dried up rice cakes. 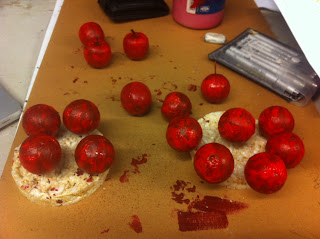 I painted a second layer once they dried in a rough textural way to add more depth and colour. I then applied yet more reds and topped them off with some red sparkles. 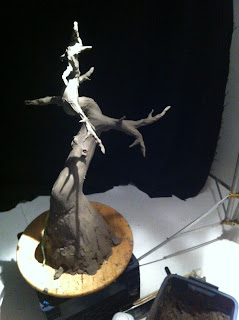 Here is the plasticine tree I built as an animation on the spinning lazy susan. 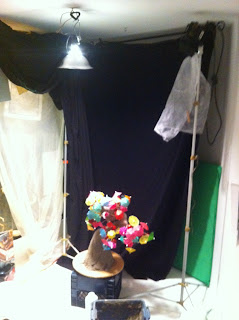 Here is the general set up once the lights had been turned back on and after all the leaves (tiny drink umbrellas) had blossomed. 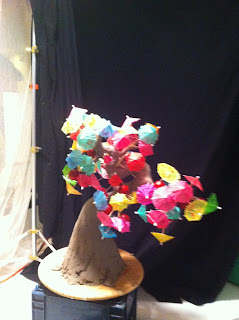 You can see the twists and turns of the trunk. It got so hot in the studio space under the lights the plasticine got soft and the entire thing slumped. 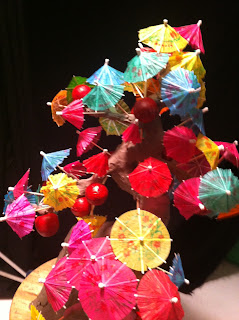 You can see in this close up the delicious looking fruit amongst the colourful umbrella foliage. 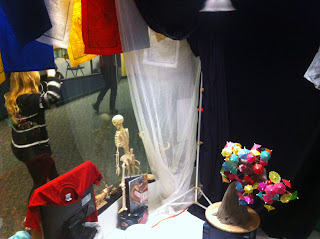 You can see Lindsay Sorrel doing some wacky stuff outside my window space while I shoot this scene. 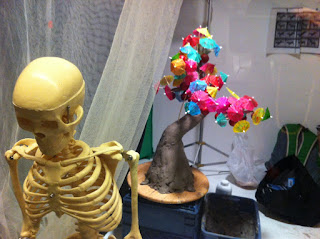 This is the tree after the shoot and after it slumped. I had to use many bamboo skewers both inside the structure and on the outside to have it stay up. I think it turned out really pretty. 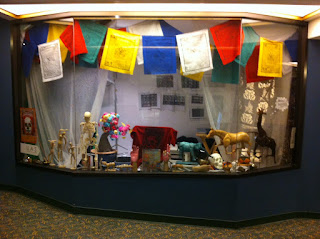 The shot from outside my space before going home for the week-end.

Before we begin,  a brief bit of inspiration. 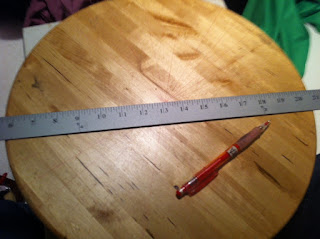 I took my handy dandy lazy Susan and fount eh center. I plotted out radial lines to break the circle into sections. This way I can rotate as I take frames giving the appearance of a circular camera move when I add it to the composition. It is a lot more work but it seems easier than building a rig to move the camera and background in this case. 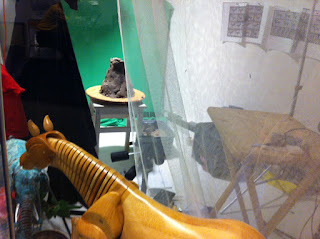 Here is the view from outside the space, looking in. The volcano grew in 300+ frames out of the plasticine I made at home. Recipe here: http://artistavision.blogspot.ca/2013/02/plasticine-recipe.html
Here is the comp of the volca with the chroma keyed out with the background and mist composited together.