I did a CORNy drawing today....
I have been reading the Obnivore's Dilemma by Michael Pollan. It is very insightful regarding the importance that corn has had on the growth of western civilization. It  examines how the industrial food complex is based almost entirely on corn and products derived from corn.  It is similar in some sense with the documentary Food Inc. if you haven't seen that, check it out. If so...... Read the book! 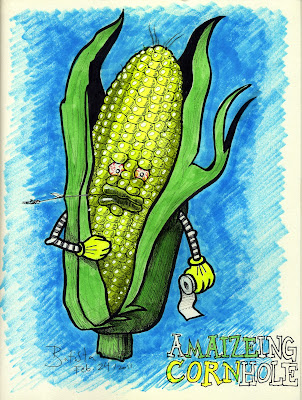 The Obnivore's Dilemma delves into big business agriculture and the historical use of corn as the tool against those who first cultivated in order to eradicate them from existence.  Corn is a high yielder. It produces far more 'product' than wheat with a  300:1 ratio for intensive seed production (it can flourish in the crappiest of soils) and it's ability to transform carbon from the air as no other grass can. We can't live without it, but then again corn cant live without us either. I find it interesting that corn's biology won't allow it to survive if not for it's symbiotic relationship with mankind.....and maybe a few corporate patents. 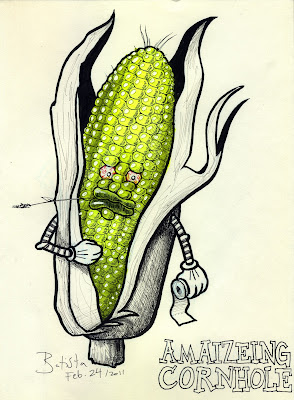 
Corn reorganizes itself back into it's original form after you eat it - weird.
Posted by BUNNY at 16:55 1 comment:

Here is posts made by Ola Birch based on my earlier Facebook Grafitti  Blog.
It's awesome! 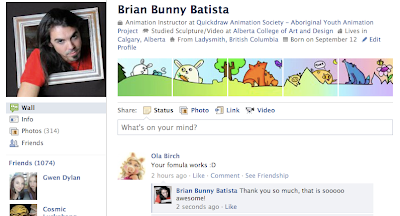 If you would like to see more of her works visit her blog  FAY MOOSE ART!!!

She was at the last market collective an has really amazing stuff available.
Check it out on her ETSY site just Click HERE !!!
Posted by BUNNY at 14:56 3 comments:

Here is the scan of my early animation character sketches inked.  I cant wait to see how they appear in print for the Quickdraw Animation Society. 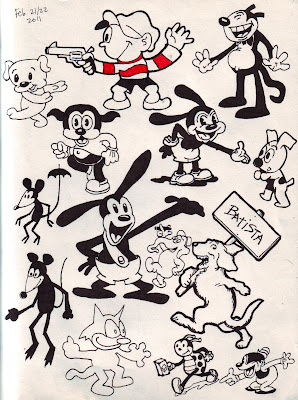 KT @ Quickdraw asked me to whip up some early style animation characters for their upcoming course pamphlet. Here are the preliminary sketches done on animation paper and the back of a photo copy in HB pencil.  There is Oswald the lucky rabbit, a few versions of Felix, Bosko, Dinky doodles, some proto mickeys (mice)etc. 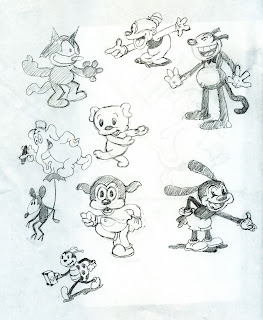 This is my favorite era of animation. The character designs are stunning using simple shapes and bold contrast, having only black and white to work with. 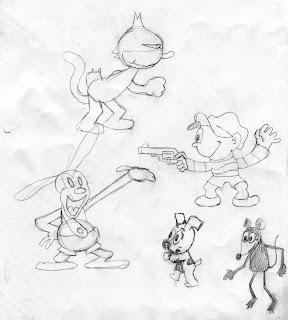 Inking comes next!
Posted by BUNNY at 18:20 No comments:

I have been super busy and equally sick.  But if you say I'm not holding up my end of life's bargain then I'm gonna sick my two Shaolin bodyguards on you. Here they are, taken from a scrap I ripped from a National Geographic, I think.  All I have left is these HB and slightly tinted with Prismacolor representations. 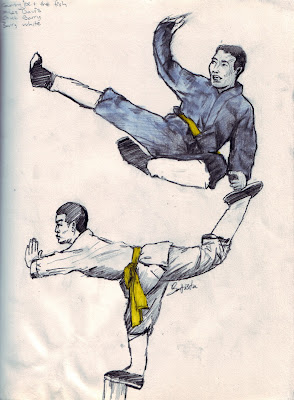 "Mastery comes in finding perfect balance"
Posted by BUNNY at 17:46 No comments:

Revenge of the Nerds!

F*ck with your friends!

I'm sorry if this is getting outta hand, it's just way too much fun!

Facebook is going to have to change this for sure. Once this info gets out everybody will be screwing with each others profiles. I had a little fun with this Hack. If I got you it's cause I love you! 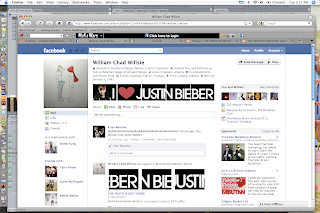 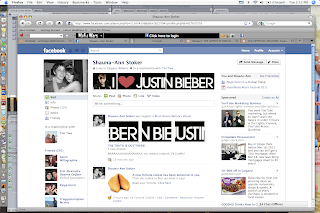 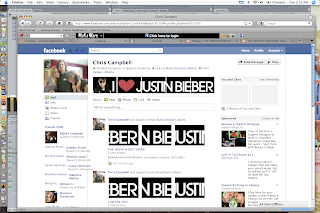 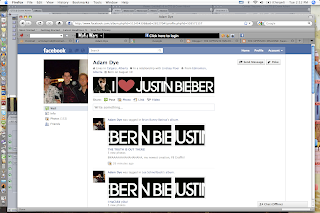 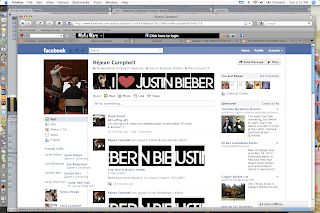 I just put up a little razmataz awesomeness on my Facebook page and invented a new form of FB graffiti. Already many peeps have been asking how I did it. Well here's how!

~REVENGE OF THE NERD!!!~
There is a new feature as part of the FB layout, 5 of your latest images across the top.  I decided to take one of my bunny parade pictures and cut it up across the top.

1) I took a screen shot of my facebook profile page first, to get an idea of the size the images would be. 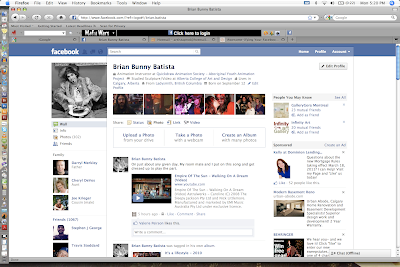 Really easy to do with Mac (Command + Shift + 3)
On a PC you may have to use Grab or another program.
2) I opened this image in Photoshop(any photo alteration program should work). I created another layer, cut and copied the entire layer and out each of the squares I wanted to fill.  I threw out the original layer, so what I had left was this image with squares cut out over a transparent background. 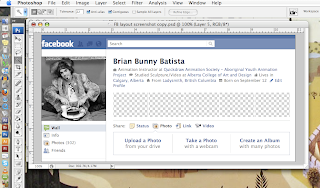 Simply cut out with the marquee.
The checkered background shows the transparency.
3) I selected an image I wanted to fill the squares with. I added a layer and inserted my image below the cut out Facebook template I just designed. It needed to be moved around and re-sized but in the end, I had basically what I would see on FB.

Here is the example with the layers shown at left so you get a basic idea of how it is stacked.
4) I took the Marquee tool and cut out and copied each of the 5 images and saved them as separate PNG files. No now I had 5 separate files named "Bunny- 1 - 5".
5) I went into my  Facebook account and opened a new photo album, I called it "Number 5 is Alive" so I would remember the 5 photos across the top go in  there.  Once the photos are uploaded to Facebook, comes the tricky part.....
6) Put them in order in the new FB Album. Tag them with your name,  from the LAST image to the FIRST.  Go to the end and tag using the 'previous' button, its quicker.   I found out, if you tag them in the regular order, the pictures will be in the reverse order. The funny thing is they should replace the ones that were there. 5 across the top.
Trouble shooting:
If someone else tags a photo of you more recently it will pop into the left most square. Now this is not really a problem actually, just un-tag them all in your album and redo the process. Hmm, this can be a mess, but it also has the potential for other things..............
Causing trouble:
The same is true if you decide to put this up on other peoples, tag them in reverse too. He he. Geurilla  FB advertising.


MAYBE I'VE GIVEN YOU TOO MUCH INFO, HERE IS HOW TO CREATE A FB MONSTER!
I take no responsibility for how you decide to use this information, even if it annoys your friends, it is all in good fun! Who knows, enough of this an FB may change how tagging works!


To remove: All they have to do to get rid of them is un-tag themselves in my photos. 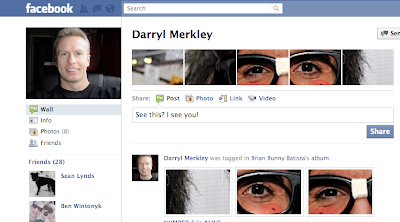 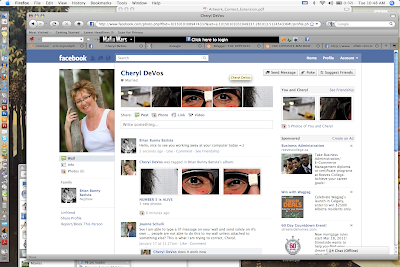 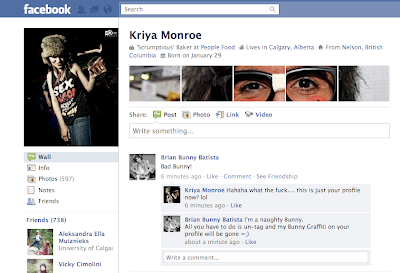 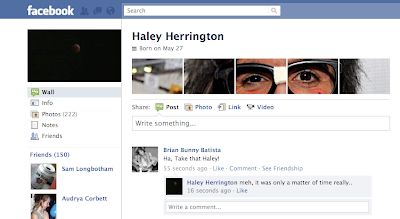 Here is bunny having some fun my poking his head into his closest friends FB pages today =;)
"I see you!"