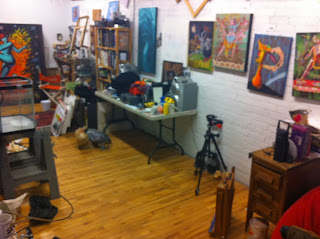 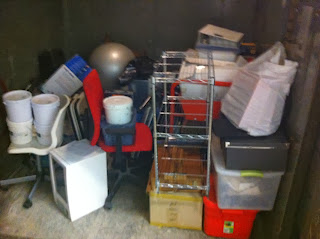 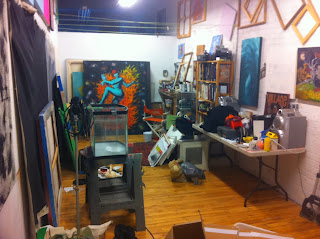 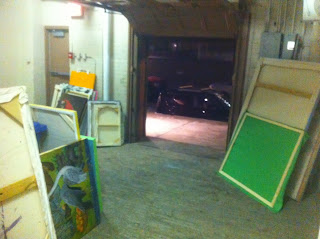 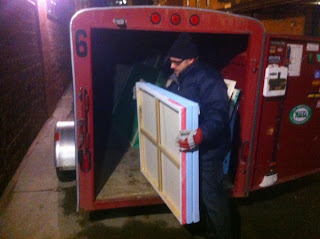 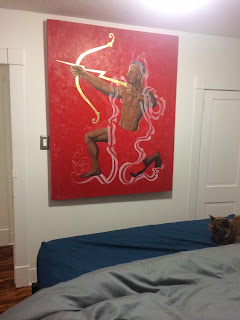 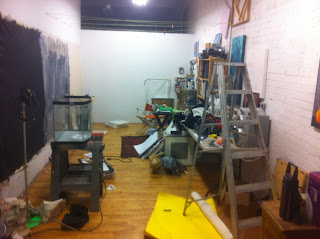 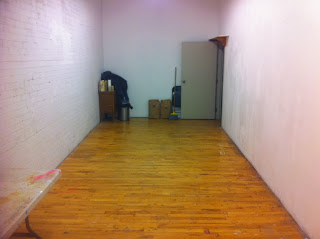 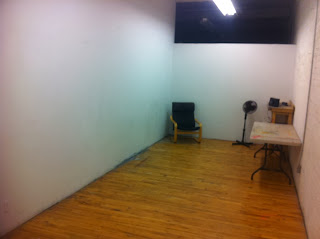 The White Lodge Gallery held their annual Black x-mas show. This instalment Horror #4 show was this past week-end.  I created something to auction off, here are the steps. 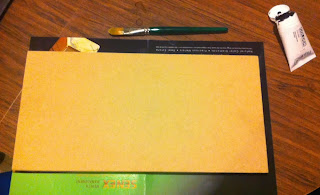 Jim dropped off this slab of MDF to me to create an art work for the exhibition. 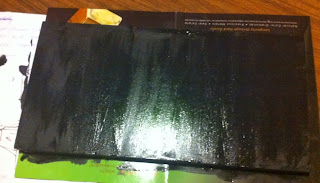 I gave it a good coating of black gesso to create a ground for painting. 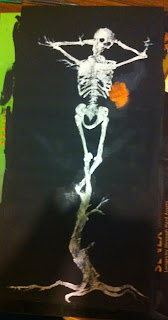 I painted this reclining skeleton and attached his legs to a tree trunk. I rubbed in a bit of black on the bones to help create a little bit of texture. 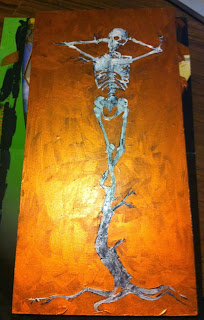 I then painted in the background with copper paint. Ooooh shiny! 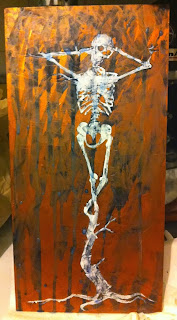 I then poured ammonia to patina the copper surface. 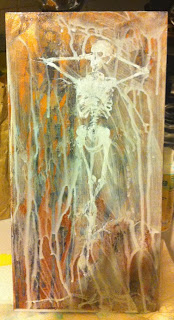 I then clear coated the piece to protect the surface and added in a bit of interference pigment to give it a bit more sparkle. After it dried I sanded the surface a bit. 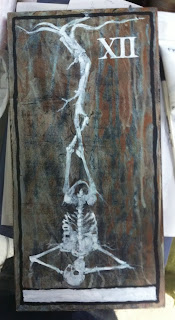 I went in with black line and some white to put in some tarot card inspiration. 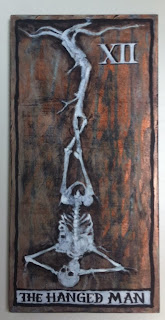 I went in with more black to help pop out the skeleton and gave it a textured clear coat on the surface. 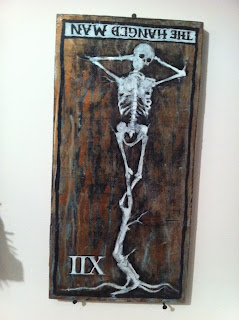 And here it is hung for display at the gallery. I liked how it looks up side down. :D
Posted by BUNNY at 12:28 1 comment:

Today is pay day, so we are wrapping up week 3 & 4 of the Aboriginal Youth Animation Project.
We began the week with our first group project where we created a metamorphosis film together. 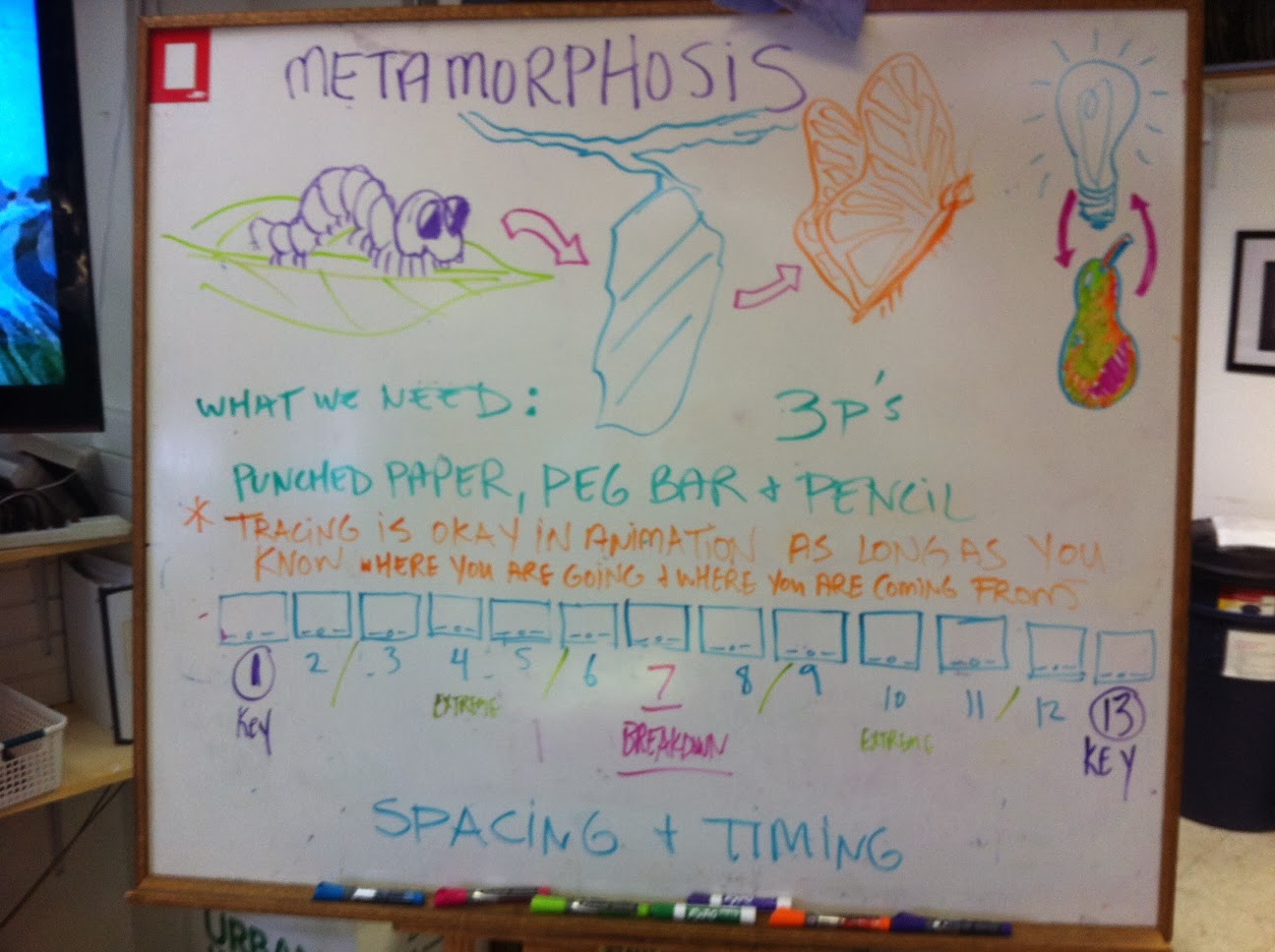 We discussed the variety of possibilities with this technique as well as how to easily breakdown the phases of drawing. Each student does a drawing which metamorphoses into the next in a our ani-jam. 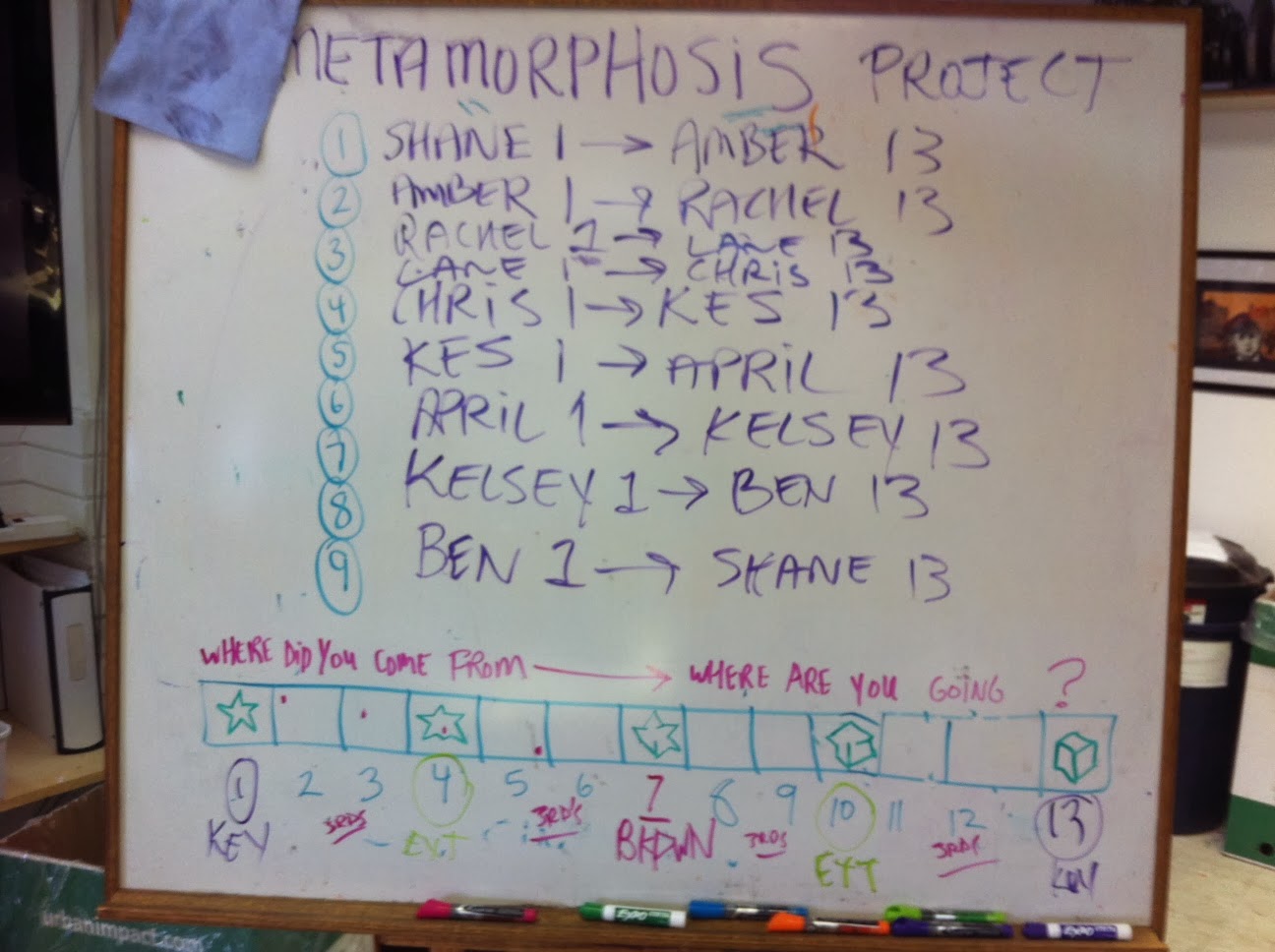 Here is the chart of the planned animation. Below I show the frames side by each so that the sense of time becomes tangible. Having 12 sheets of paper that are photographed for 2 exposures each really helps make the amount of drawing needed for animation a reality in physical space. 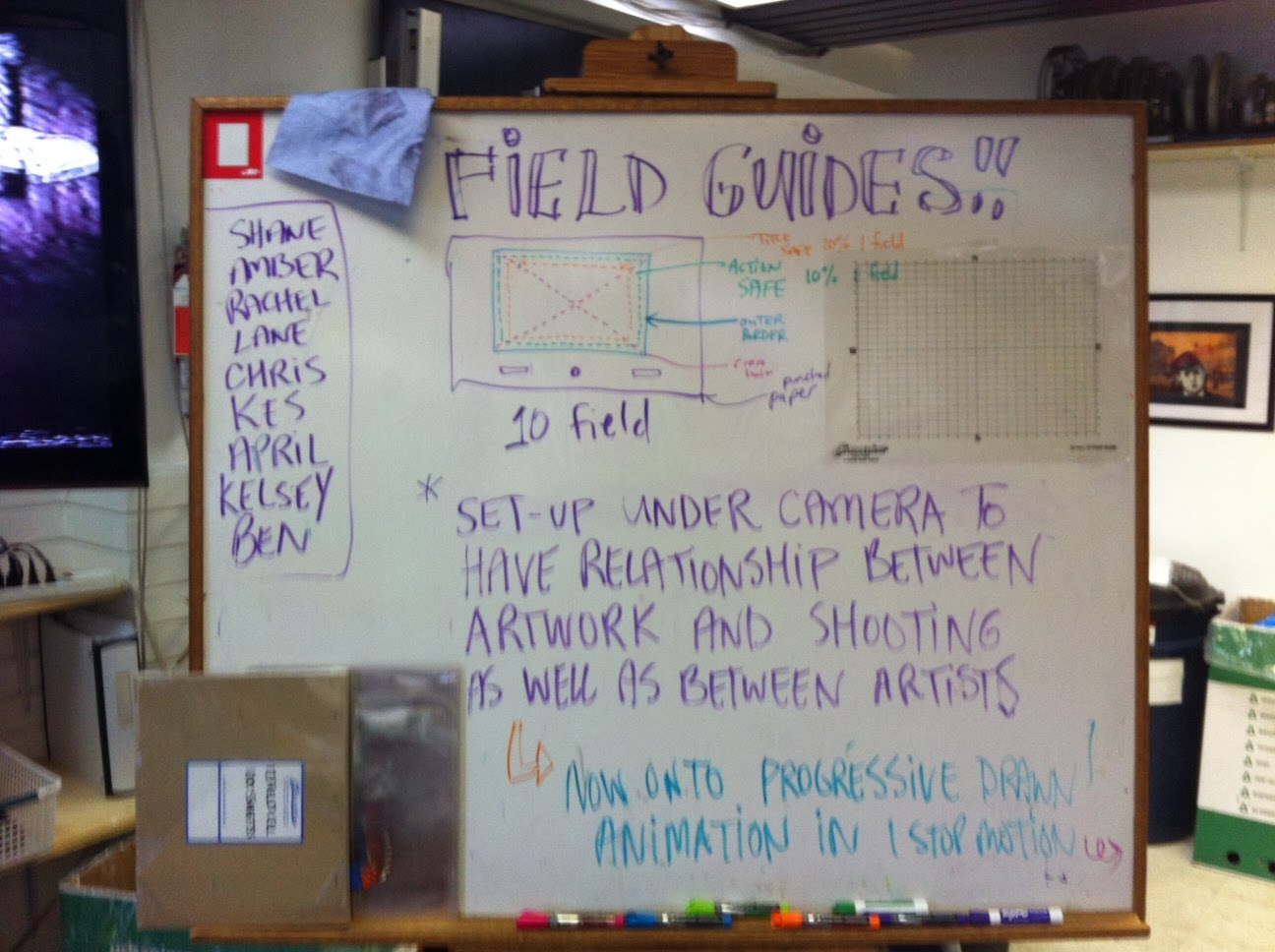 We then created our own field guides by drawing on acetate to use under our animations. This helps us all work to the same aspect ratio and size for our projects and to help line up the artwork under the camera. Guides cost too much t buy but are super easy and cheap to make. 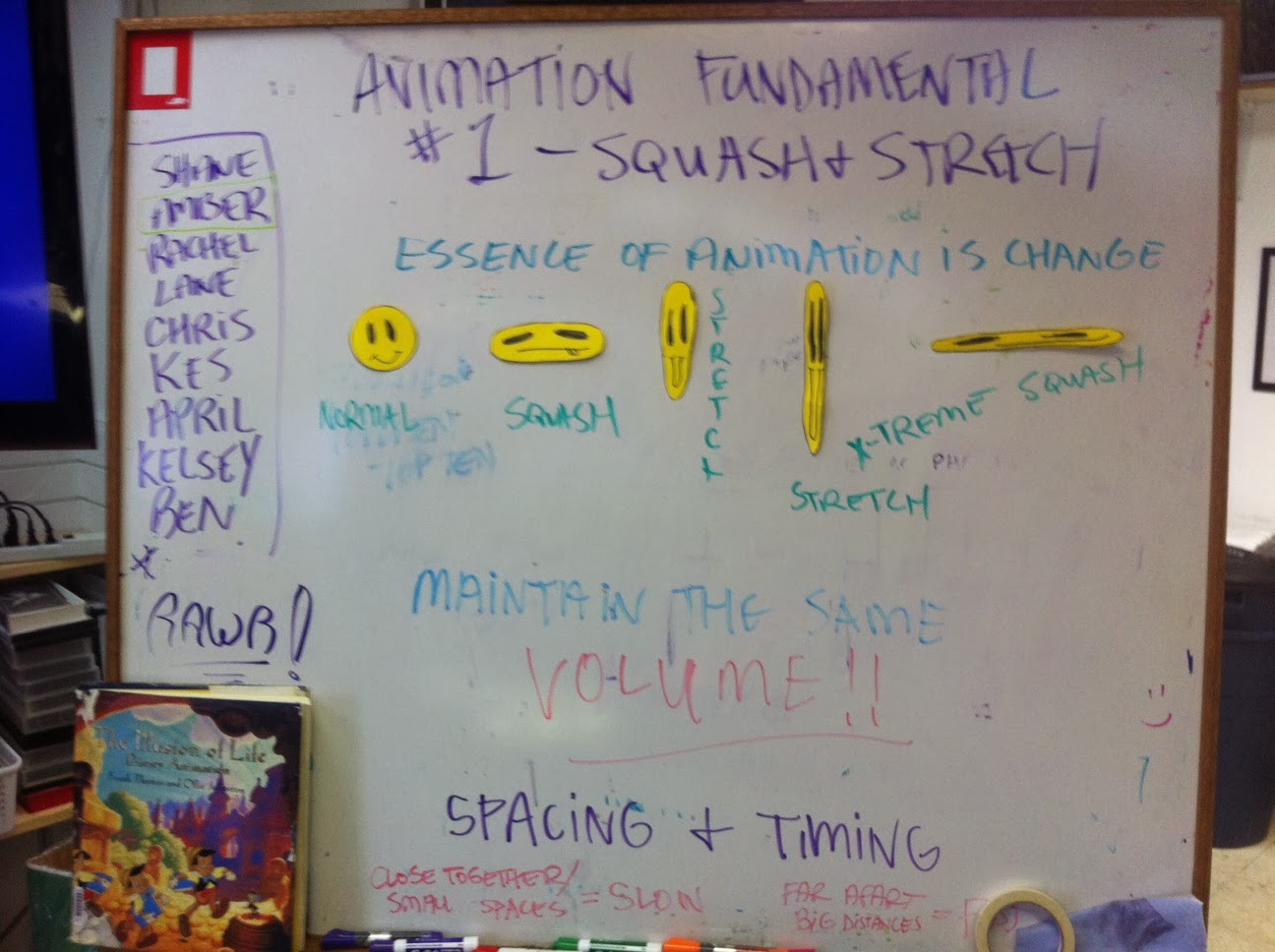 I taught the first fundamental of animation which is the squash and stretch. I get the students to create cut out self portraits in which to experiments with the spacing and timing under the camera. Then they pair up and have head bounce battles with the various techniques they have learned to see what thee can make happen. 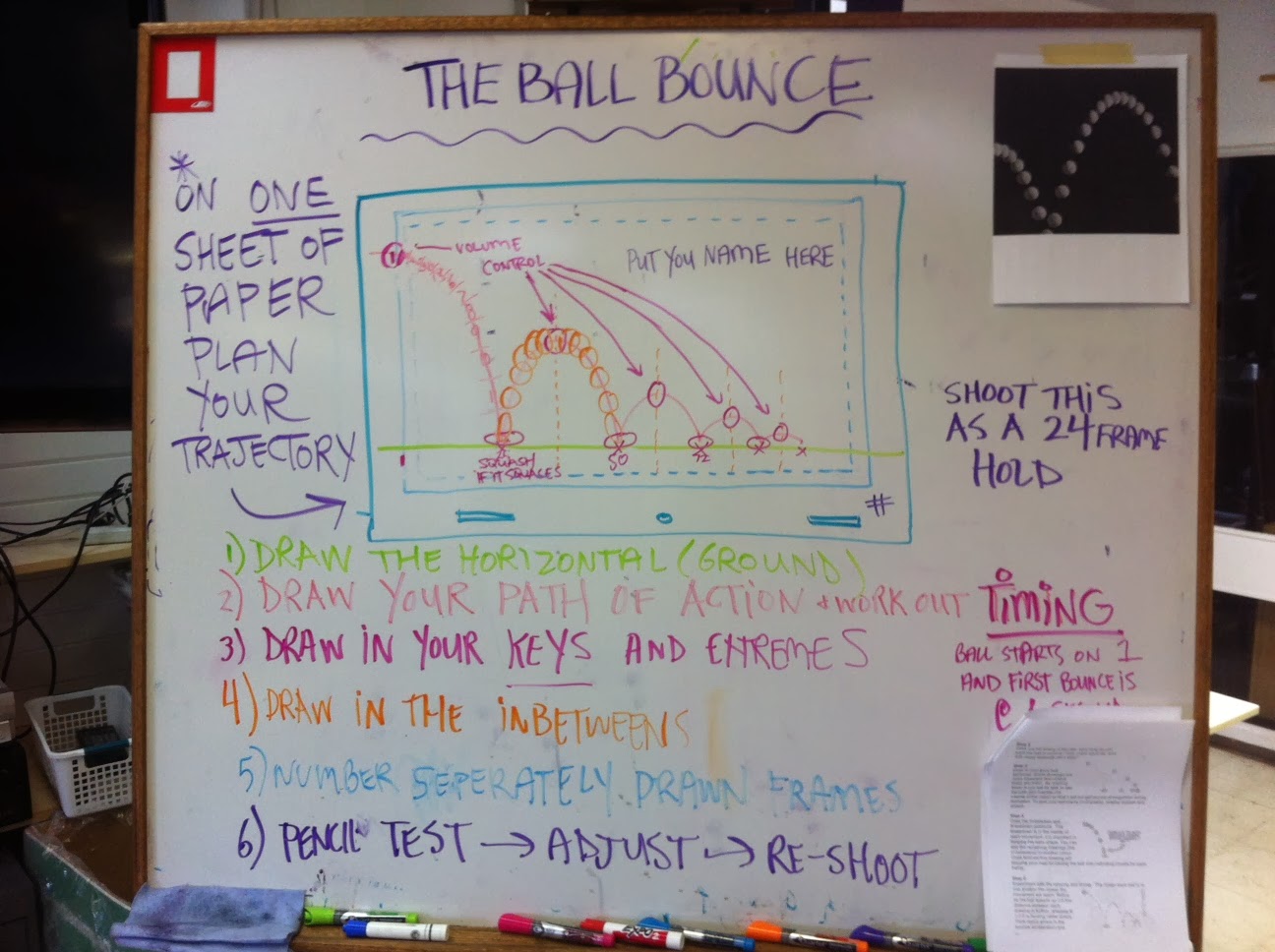 The participants move on to creating a ball bounce using the proper planning technique, first drawing a trajectory then figuring out the spacing and the timing on one sheet. Later they will transfer the plan onto individual sheets and pencil test it. Following that they will correct the timing and anything else that isn't working. Afterward, they will have a solid plan and a tested example in which they can then turn it into a bouncing character animation.

On with the show.

Draw 'til you Drop V

Mark Vazquez-McKay put together another great drawing from life event for artists. I had to teach my final Drawing 1 class at ACAD on Saturday so, unfortunately, I couldn't do both days of the drawing event. However, It was still so worth spending the entire Sunday with the great group of people improving their skills and honing their craft. I am especially proud 3 of my past students joined in for the event. Their spirits are strong and I hope more can make it out and stand shoulder to shoulder with their peers in the future. 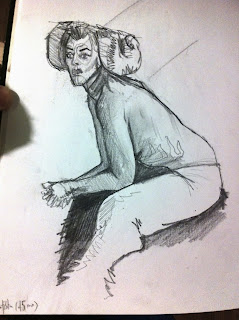 I am posting these Iphotos from the sketches I completed in my sketchbook and on one sheet of the new Mellotex paper I picked up from Swinton's (Thanks Doug and staff for introducing to me an exciting new product to experiment with). I did more drawings but didn't photo them yet but I will add them as soon as I do. 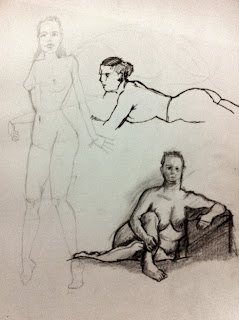 Quick poses as is the custom with an early start in the day to get the arm loosened up of the longer sessions. The one above top right was done in ink to get my hand ready because you can't erase the mistakes. Below that is one done in 6B. Thanks to Daisy Deville and her fantastic Burlesque models for working with us artists. It is great to mix subcultures to great benefit to both groups! 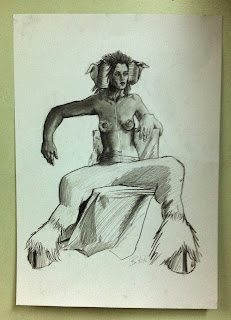 One of the rooms had a burlesque model who posed with attitude in a satyr costume. The other room had a great drawing opportunity but they were happening simultaneously and I unfortunately couldn't be in two places at once. Drat!  I went for horns and hooves since it is a lot more like my work. I am happy with how it turned out. However, by this put in the day I was tired, so I sat with my paper flat rather than standing so the work became contorted and out of proportion a bit which I find happens when you are making large work at an angle. I also experimented with some new blending materials on the new paper and had to rescue the face, though it does resemble the model. She said she really liked the piece to me after the session = :D 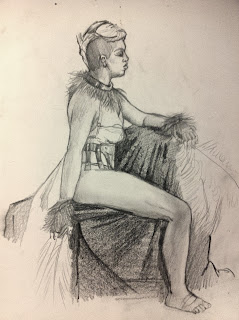 This is the final burlesque models pose for the final session of the event. Everybody was still going hard. The fatigue helps make more natural drawings I think and frees up the artist, thought it is a long road to take to get there lol.  If you'd like to join in the fun keep following this blog and I'll keep you posted about upcoming events like this.