Surprisingly, the palette still had wet paint even though my studio is like an oven. 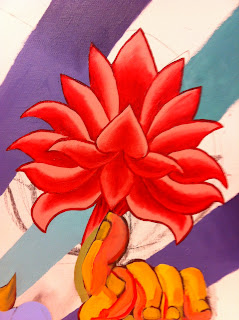 The first thing I tackled in this studio session is the shading of the flower. I  used Alizarin crimson
which is quite transparent. I used a soft bristled filbert to gently shade it. Meanwhile Carl Sagan is making whale song sounds in an episode of his Cosmos series on my laptop. I got out some sap green and added shadow definition to the stem. 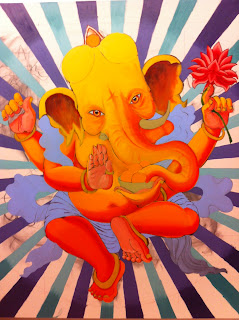 There was still plenty of red on the palette to begin putting down shadow definition on the lower half of the body. I also painted in the iris and eyeball with high light. I am going to wait until I paint the skin folds to add the eye lashes back in. It was too hot for me to keep working so I went home before 11.

However, let it be known that it may be hot in the kitchen but my work ethic is still strong. Officially, as of today I sold my Burning Man ticket and will not be attending even though I've been going since 2002. Instead I will be in my studio painting during that time!