this is the continuation of the drawing class material.

We began with a quick review of isometric drawing and how to use the Q-bert box to draw a contained object, such as a fire hydrant.  We then reviewed our basics for one and two point perspective. 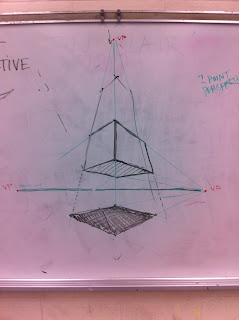 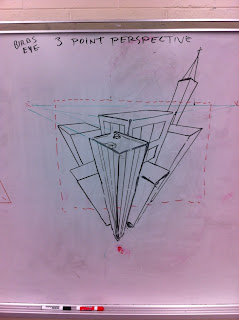 Here is an example that might be used in a comic book, like Spiderman. Its more of a birds eye view looking down on the top of buildings. It is constructed in the same way but this time the horizon is set high and the third vanishing point is below. It is important to remember........ often when you are drawing your vanishing points are far off the picture plane/paper. The dotted red line gives an example of where the actual frame of the drawing may be. 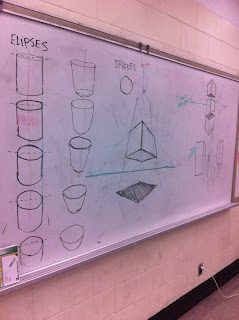 We expanded these ideas and rules into close up objects in order to learn foreshortening.  Also how an ellipse is drawn correctly. To the far left are examples of a column drawn in isometrics and to the right of that wioth foreshortening ( or in 3 point perspective) notice how as the cylinder moves away the lower/further end becomes smaller than the top. 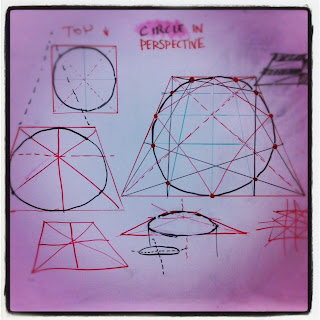 Here is the examples on the board that I used to illustrate how to draw circles properly in perspective using some geometrical tricks. You can eyeball it but people tend to put the center in the wrong place. BY drawing a diagonal you can see where the center intersects and then draw a line parallel to the front and back. The front portion will be wider than the portion further in the distance. You can then split up those into 16 smaller squares and use geometry to create points that you can connect with simple arcs.

My class notes are much more extensive, and we created a lot of drawn examples to work on the techniques. It is really fun to create drawings using the rules of perspective!