The Wheel of Deluded Existence
From 50 to 75 hrs.

So after the Horror show, I took a bit more time to gestate on advancing on this canvas while working on an assortment of other pieces.  Here is the Wheel of Deluded Existence after I created two stencils and began back into the background.  I tamped the zinc white for the clouds and brushed in the iridescent bronze for the flames around the central deity. 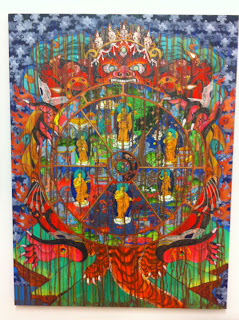 I am really happy with how it has come along to this point, the background details are really helping to make this thangka inspire painting vibrate how I like.

I put in another long night after working all day at the Glenbow teaching Flipbooks and Zoetropes as part of their "week-end at the  museum" education program.  I decided to spend most of the time enhancing the golden ropes surrounding the wheel. I drew in with sharpie outlines and fine details on the wheel. Later, I added the light yellow high lights, dot by dot, it may have taken some time but it really makes it pop! 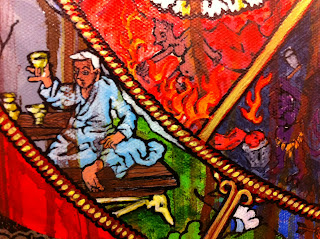 This helped me to decided what colors and details to add to the rest of it. I highlighted golds, drew in wood grain, gave all their clothing a high light, painted in clouds added texture to rocks and concrete. 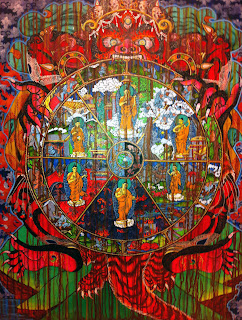 I also outlined the Buddhas, and put some wavy energetic line details to their body halos.  The above photo from my iphone with some reflection from the flash should give a general idea how the piece is shaping up. My work is very difficult to photograph because of all the different materials that reflect. Also the lights in my studio often throw off the color on my photos....color balanced fluorescent bulbs. Aaaargh!!!!! You should see it in person.  (Details on how to make this happen , below) 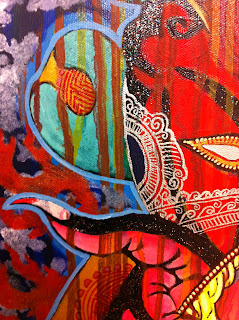 Here is a detail that shows the lighter blue outline around the edge. You are better able to see  the glittery black skin, some of the high lights, the flames and pattern on some of the fabric. 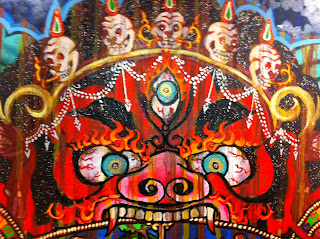 This is the face of the deity in so far, reminding you to be mindful of your P's ad Q's. I have painted the back with some Gesso and will be writing down critical information for the upcoming show. I will be dropping off the work to Daniel Sponagle and Damien Manchuck for the "Out of the Box" exhibition happening THIS THURSDAY @ 1407 - 11th ST SW!


Come by and see this work and work by over a dozen other fantastic artists!
---