I started this thangka for the upcoming horror show. Also referred to as a wheel of life, it is based on classical Tibetan Buddhist imagery. It depicts the realm of existence associated with unenlightened beings.  It may not be the ultimate in the 'horror gore show of hell', but it is the one that the majority of us call 'reality' and that in itself is very scary, indeed. 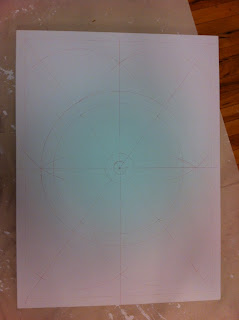 I started with a 30' X 40" wide profile stretched canvas. I use the width of the profile and the straight edge to create a border around the image since I found my past works crept too near the edge of the canvas.

I need to find the center point and a vertical and horizontal axis. I do this without a ruler, just a straight edge and compass or string with pencil tie to it. I go from corner to corner at first drawn with a red pencil. Once I have a center I draw circles intersecting the lines an creating points of origin for my vertical and horizontal axis which I then draw in with the straight edge.  I also draw circles from the center point for the inset images to be create later on. 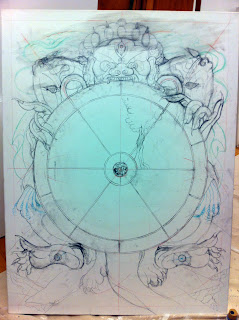 The next step is to draw in MARA, the demonic deity that holds the wheel of existence. I do this with graphite (a mechanical HB pencil.) Graphite does not readily stick to the surface well, it is workable but needs to be adhered with fixative, I also coat the drawing with a clear acrylic primer.  I also use various other colored pencils to help me organize additional elements on or around the central figure. 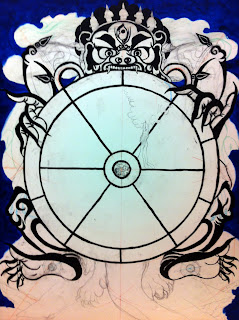 Once the majority of the painting is sketched into place (which takes many hours), I can start to work with paint.  I block in solid areas of color starting with my large brushes loosely working from the largest darkest shapes and  moving toward the lighter colors. There is alot of preplanning here in my head because I already know that the majority of these dark colors will get covered with lighter ones later on to create a bold popping effect. I move inward to the more detailed areas, which tend to be from the outer edge in toward the center, this pulls the eyes focus to the center of the artwork. After the outer MARA figure and background are blocked in I will begin work on the wheels of existence which require finer tools, and concentration.

Stay tuned for more updates to follow this and other current works =;)
Posted by BUNNY at 13:34