Thanks John Fogerty. Click this --> CCR link to see and hear some inspiration. Otherwise, do as I do and hum it in your head.

Woke up feeling like THE COLD that "everybody seems to have" has moved down into my lungs. No matter, I'm gonna keep on burning and keep on working, got to get rolling, rolling, rolling on this painting.  I got out of bed and called the Canada Council about a grant I'm applying for and answered an incoming call agreeing to do an interview about some of my upcoming youth work for the Calgary Journal. I also spent many hours working on my SACRED IMAGES book design on Blurb. It's coming along quite nicely, but the proof is due Sunday or I loose my Groupon credit of 2 for one. Fingers crossed.

In the afternoon, I dropped off my 28" wooden artist model Giraffe to Karilynn down at the Quickdraw Animation Society to use for their festival. While down there, I picked up an Imac to create my next After Effects class lesson. I'm running an older version and my computer just isn't fast enough anymore to do what I need it to do. I eagerly dreaming of the day I can afford to get a new Mac with LION on it myself.  I have enough on my plate at the moment, I don't need to be fantasizing..... 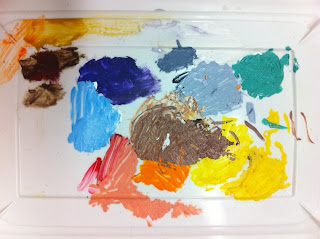 Meanwhile, Kids in the Hall - Season 1 played in the background and my hair is tied up with a twist tie because I couldn't find a hair tie. I decided to put off painting in  RED for a bit. I anticipate adding lots of blood later on., it's horrific after all !=;) I moved straight into flesh tones made with a deep Naples yellow and a permanent Alizarine. This way, I'll have all the characters placed, even the monkeys ;) I blocked in a light and dark neutral greys for the rocks and buildings. 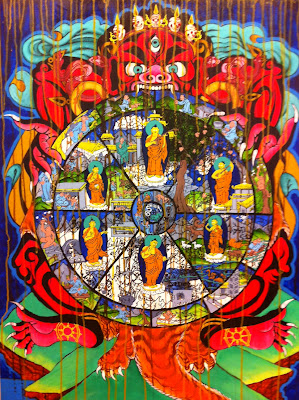 I put on  Martin Scorsese's Kundun in the background to keep me company and remind me the history of the 14th Dalai Lama's exile from Tibet. His struggle set to the audio compositions of Philip Glass. During the 2+ hrs, I blocked in the whites of eyes and Buddha's lotuses.  My hand became severely cramped, but I was determined to block in the clothing before going home, even if it was already past midnight. I am coughing harder now, it irritates me. I need to get this far to feel that I accomplished enough.
Posted by BUNNY at 00:29