The show must go on.

I was super ill and losing time and now I had the speed bump getting the text the right size to fit all the names and had to start over. 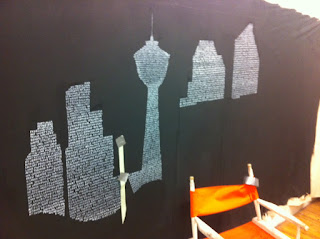 I had to do an all night er to get some distance between me and failure. Here is how far along I got before taking a much needed break. Eyes crossed, hand cramp and headache starting... but progress is being made in the name of art. 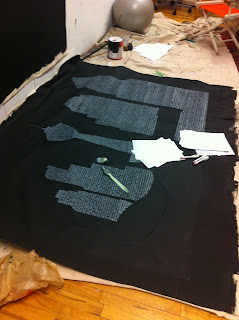 Due the the angle of working on the wall my hand was cramped and I couldn't hold my materials any longer. But I had to keep working like a marathon runner using all my stamina in order to meet the specified deadline. 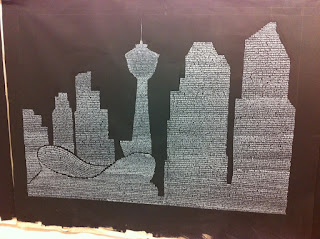 BAM! I got home the next morning for a quick nap just after 6 am. But I had the first panel completed and able to show the people who needed to see something. I felt like a champ over this initial victory. 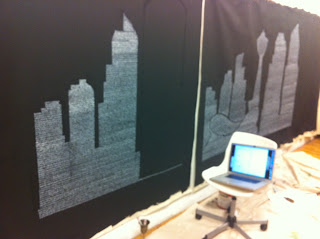 After my evening animation class I rushed back over to my studio to crank out hundreds of more names on the back panel. At this point I really lost steam and instead of wrecking what I had done and pushing through on virtually no sleep, I did what any smart, self respecting, creative would do and I took a nap. 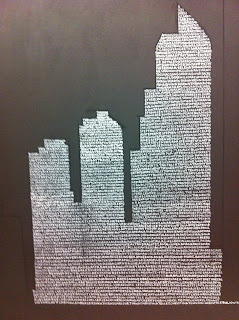 Here is a shot taken with my iphone to show a bit more detail of names that make up the texture of the silhouette. 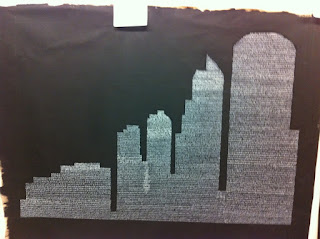 I go back to the studio for one more all day session so that I can have it ready when I meet the photographer at 8pm to snap the photos to send to the designer.  Some of the lighter whites are because I had to start with a new pen and when the paint first comes out it is pure white and gradually it gets a bit darker. Once the image is put into photoshop it can be edited to even out these tones. 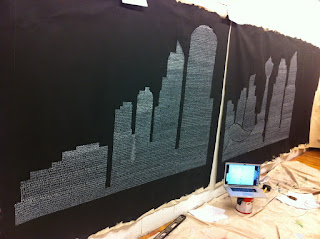 I cut the pieces in half where the binding would be to make it easier to work with and photograph. Later, we may stretch the pieces to display at the publication release event. Its a labor intensive part and falls outside of the expenses of the budget, so I'm not entirely certain if it will be done. 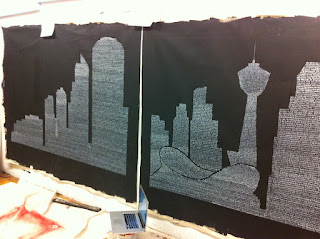 Another view of the two panels form the other side. We re-hung the works on the far wall in my studio to be photographed. 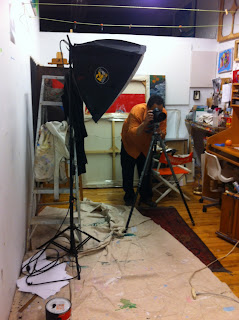 Here is Sean at the far end of my studio after meticulously setting up and measuring then taking many large format long exposures without us moving an inch. I was excited to finally be done, as I waited for the thumbs up that we didn't need any changes or a re-shoot.

The next day I was estatic! I pulled off the impossible!

Both the Designer and the Calgary 2012 rep sent me very supportive emails full of praise after seeing the delivered final image. It made my day, and it really made all the hard work and lack of sleep worth it. I cant wait to see the finished publication!