I hung hooks and anchors into the brick and mortar. Then I strung up glow rope across and overhead in order to be able to hang accessories and flowing garments during the modelling sessions. 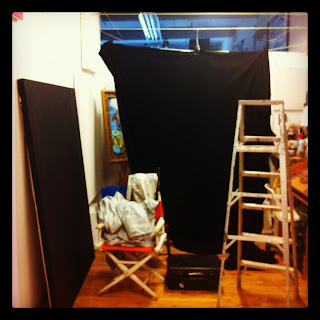 To the left is the black canvas for my Shiva painting. Above is the glow rope strung at about 240 cm height. The black pelican case is where the models will stand, slightly raised off the ground. I have lights borrowed from Emmedia and a few of my own to set up for each session. After doing this I spent a few hours preparing the canvases with the sacred geometry layout. 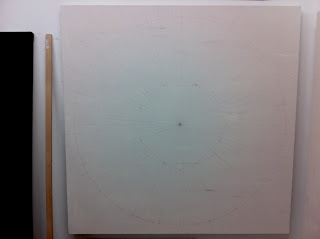 I made a central vertical and horizontal axis and two diagonals. I decided not to use graphite because it can lift into the painted layers. Instead, I am using colorerase pencils to do my initial planning lines. In the past masters would have used chalk lines.  I tied a string around the pencil and held one end in the center axis. By doing this I could draw circles like a compass. I also made measurements from the center to create the two octagons. I created many lines flaring out from the center because this will be a painting of Ganesh and I hope to have a dynamic background. 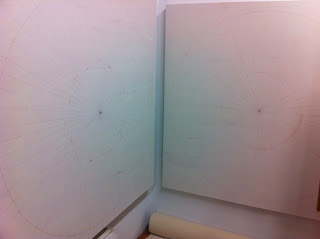 Beside the large Ganesh canvas it is another identical size canvas where I went about the same process. I made fewer radiating lines and changed the pattern but did create a large circle in which the figure will be placed. This canvas will most likely be used for one of the female godesses lakshimi or saraswati. I also worked on creating the geometry on a number of other canvases.