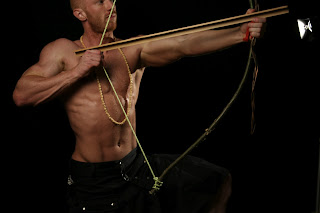 I began work on a painting of Rama after a fantastic photo session with the very ripped and handsome Mr. Jules Lloyd. It was hot in the lights and at my top floor studio so there was a healthy sheen on the both of us, by the time we were finished. I had to use a camera Borrowed from KT and it took a bit to get used to the low light aperture but some of the photos came out fantastic. But I had to pick only one to work from. 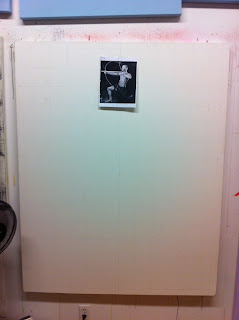 I spent some time selecting which image I would use and which canvas it would be painted on. I graphed out some lines to get it centered. I intend on raising the arm up so the arrow is not so linear and horizontal with the canvas to make it more dynamic. 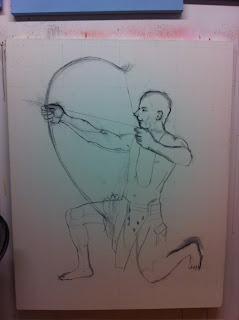 This is the rough placement of the figure drawn in with charcoal. Afterward I gave it a quick coat with workable fixative so it wouldn't smudge all over the place when I began to apply paint. 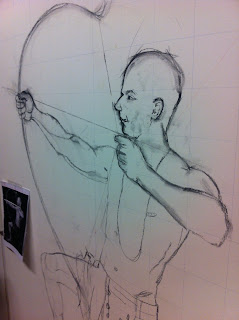 The initial sketch is to rough in the placement, the next stage is where I will turn this into a more refined "cartoon" outline drawing. 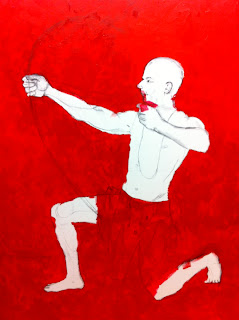 It was getting on in the night. I was listening to Penn's Sunday school podcast. I didn't have the focus to do the line work and I had a good idea that I wanted to create a red field to work in. Who knows? I may make the background gold and have his clothing be red with gold embellishments. It really helped me to feel like I made progress to come back to the next day as well.

Sometimes you have to use a "Smart art making technique" rather than sticking to the original plan!