That was such a fun time!

I am still feeling nerdy. It took a lot of energy to run a table in Artist Alley but it greatly exceeded my expectations. I also broke out my pirate costume and joined the cosplay. After all......."Everyday is Halloween." 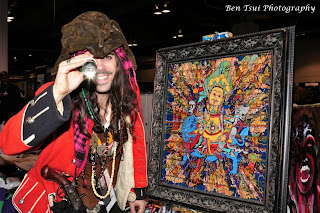 The first one "the History of Animation" was like the hundred meter dash. A half hour to cover the main points in over a hundred years of technological and artistic developments. I was beat after that one. I handed out 60 copies of the notes, but the room kept filling after I had run out.  I vaguely remember ll the technical difficulties with the initial set-up of the space and a large Card stating '5 minutes' the end. It turned into a blur and I began losing my voice shortly thereafter. Afterward participants came and shook my hand or visited me at my booth.

The second art was about the "Challenges of Independent Art forms". The talk was in the afternoon on Sunday, the final day of the expo, by this point I was bagged from the event.  I still brought it!  This had far fewer participants. It was more intimate and I could make eye contact with everyone. It was opened for discussion at the end and I was surprised by the types of questions the artists int he group were asking.

It was a strange week-end.......Among other things on Saturday I got hit by a mini car in the morning while exiting the main staging space. I was on my way out to borrow the rack from Ola and Gord and I were talking and the guy who was speeding tried to brake when he saw the guy dressed as Jack Sparrow. Luckily, I just went with it and the vehicle carried me along a few feet. It didn't hurt initially, I brushed myself off and kept going. The show must go on (with or without business cards) It wasn't until the next day that I felt the impact and was limping a bit, which added to the overall pirate look.