It was a busy and hot week-end. I realized as the wind blew and the sun crisped up my skin that this is the first time all summer that I had been out under its powerful rays. 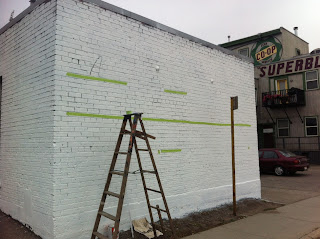 I put down some painters tape to line up where the quote they asked me to paint would go. You have got to make sure to buy the right brand. I think this is scotch #233.  All the other stuff I have bought at the art stores around the city sucks. This roll may have come from Home depot or an auto body shop. 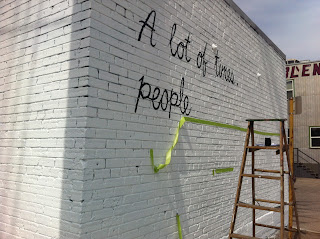 The brick drinks up the paint and takes an awfully long time to paint by hand. It drinks it up and I have to go in between each brick crack to make sure it has full cover. The wooden ladder is scary and precarious. 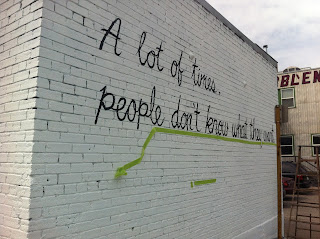 Curiosity has so many cars slowing down to look, it could be a traffic hazard, making it very effective advertising. 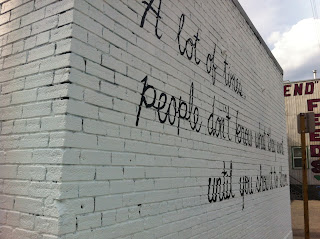 Now to stand back and have a look at what needs to be done next and to run home, and get a little food in me. 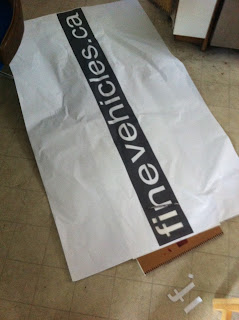 Meanwhile I need to cut a stencil for the company name. Here is the large print out I was given so I attached together some large pieces of canvas paper I had in a pad and put the backing down on the floor to protect the lino as I cut. 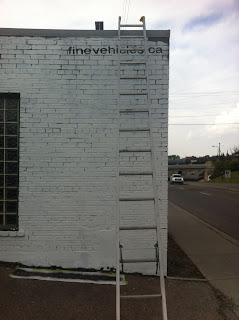 You can see the painted stencil to the lower left and how it initially looks up the ladder. This ladder is much better but it still makes me nervous since I have no spotter. 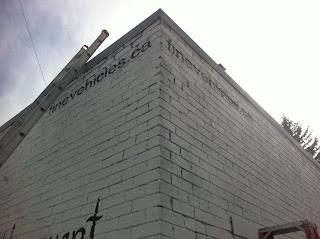 It was so windy the stencil would blow off and the paint would spread so I had to go up the ladder with white and tighten up the edges. It was annoying and I was running out of time and daylight. 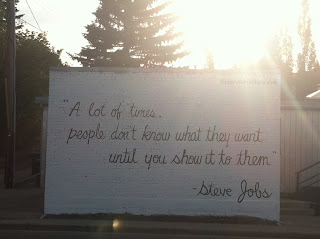 I got up the quotations and the authors name by the end of the day. 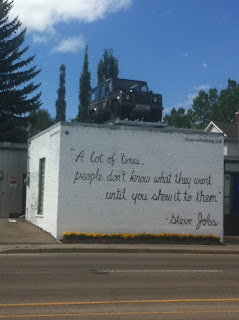 A few days later Dallas and the crane crew lifted the land rover onto the brick box roof top and the owner put in some nice yellow flowers. Check it out the address is: 1700 - 11th St SE.

Well, I finally learned After Effects. I had to take an extra 14-hour weekend seminar before I finally felt comfortable with it. You would be proud of me. I'm taking 4 classes at 2 different colleges this semester in addition to my F/T job. I probably won't see you again. I miss you Brian.