Scrape it off and start over 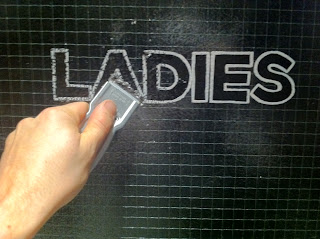 I contacted the designer to meet to get some feedback on my work. After seeing the two days of work, the designer requested some changes. First a thinner white line inside the width of the lettering rather than outside. That way the spacing between each will be more prominent and the black will be slightly thinner.  This is going to make it look even better.  I grabbed a thinner liner brush and a scraper at the art supply store and booked a full day to continue working on this project. 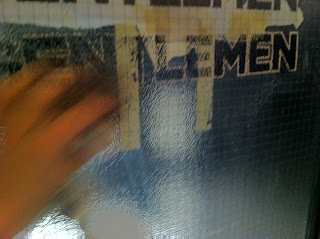 It is good being open to changing the initial work to make it better. I want this stuff to look rad! More importantly I want the designer, the concord group and the National to be happy with what I do for them. I wouldn't say I'm a perfectionist, I'm the kind of guy who is willing to scrape off two days of work and prep to make it better and give the client what they want! Since the glass isn't entirely smooth it was difficult removing the paint.  It took me an hour to scrape over 10 hours of painted lettering. Which proves how well this stuff is going to last! 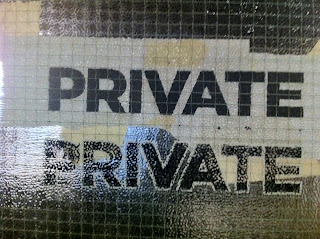 At first I thought I had placed the lettering too high. The second change designer requested is to move each sign to be moved higher up.  I'm glad I was only half way thru the process and my projected hours. That's the thing about not having test swatches or somebody sign off or see the work before you begin. I had no direction on placement or how to handle the signage.  Cost me two days of work, but I agree it is going to look much better with this feedback. Its a good lesson in working commercially. Tools of the trade.
A paint scraper, a brass scrubber, some steel wool, windex and some paper towels.
Notice the beautiful floor tiles. 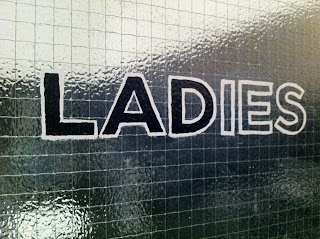 The order in which I painted the lettering changed to what I originally planned. First the white outline, so that they look good from both directions. Then I filled them in with the black. I am excited at how good the new signs are looking =;) 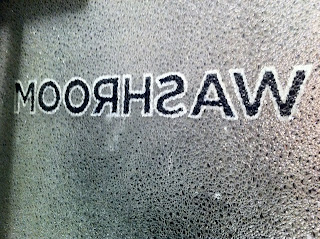 Here you can see the effect from the reverse side, from inside the washroom, while exiting. 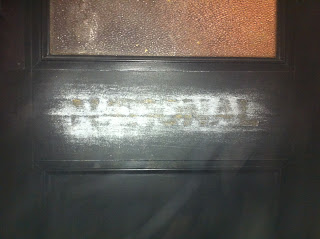 Change number three, no stars on the doors. Based on how things turned out, we decided to remove the signage on the lower part of the door and instead paint the white and black classic lettering in the window.  It will definitely create a more cohesive look. It is a little sad to sand off all that gold. 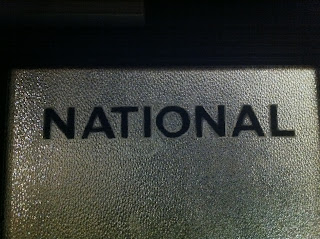 I had to paint the lettering in reverse, standing on a chair. The reverse side of the glass is smoother, can't paint very well on the deeply stippled side. I'm really happy with how it is coming along.
The next step is to repaint a second layer of black, then reline it with a thin white. The reason I am doing this additional work is that I want to ensure the lettering is opaque. I have a really bright work light to shine on the reverse side when doing this. I may also rework some of the letters once I can see them with a fresh eye.
Posted by BUNNY at 15:29