I am now teaching full time in the days with my job as animation instructor for the Quickdraw Animation Society's Aboriginal Youth Animation Project. 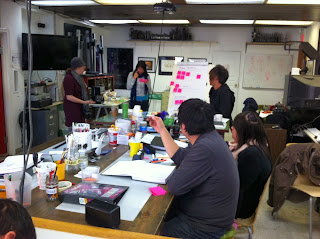 Along side life skills and team building curriculum is my history of animation component. We covered a lot of content as well as made animation toys and watched a lot of movies. I took a few iPhone photos of my whiteboard notes to share with those of you who follow my blog :D 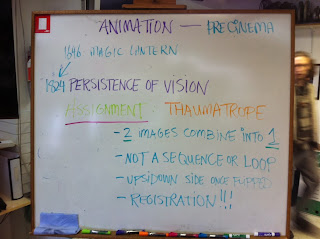 After a history of human communication slide show and lecture we move into the developments of the 1600's. I have the class make a Thaumatrope as their first animation toy assignment. I have to continually tell them to stay off the Facebook! (hence the drawing a participant did of me in the top corner of my whiteboard in the next picture) 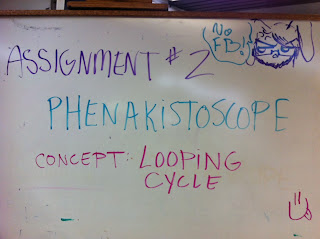 The next thing they make is the infamous Phenakistoscope invented by Philip Plateau. This is where you have a disk with slots cut out and you face a mirror, spin the disk and peer thru the slots into the mirror and images on the disk appear to be moving. This eventually gets developed into the zoetrope and many other fantastic inventions. 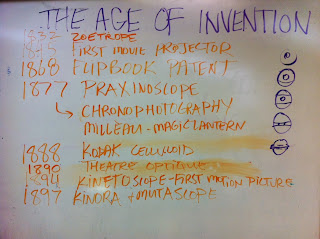 We go thru the development of more animation related inventions and why they are important leading up to Edison's invention of motion pictures. We spend some time reviewing Muybridge's serial chronography and begin work making flip books, which I intend to later film for the final screening and possibly print to hand out as gifts. To the right in purple is an example of how to breakdown the stages needed to draw a blinking eye. 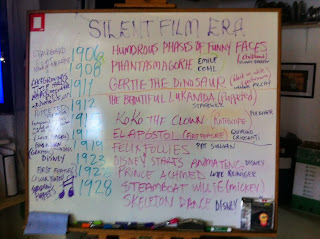 In another session I cover the Silent film era which includes the first animation ever made, the wonderful "Gertie the Dinosaur" by Winsor or McKay and some other hits along the way until we arrive at Disney and the first cartoon with synced sound. To the left in purple is the breakdown of artistic devices used by each film and how they pass down thru the generation. I encourage everybody to "know their history" and pay homage as we are all standing on the shoulders of greats who developed it. 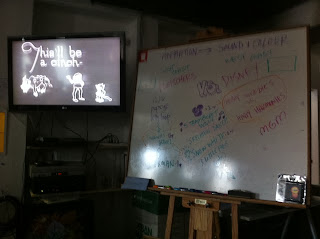 I jump into my favourite era once sound is introduced and rubber hose arms. I discuss the ongoing competition between east and west coast animation and all the developments and great films it brings with it, including the ultimate demise of my favourite animating brothers the Fleischer's.  I show how Betty Boop starts out as a walk on character, and the fact that she is a dog, literally! I go from pre-cod to Disney's feature film triumph - Snow white and compare ti to what the Fleischer's are doing and how Superman eventually brings them down. 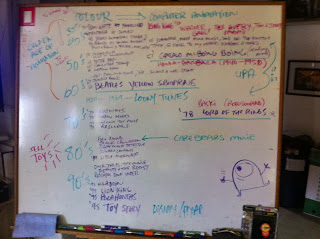 After colour is introduced we enjoy the Golden Age of animation and the massively awesome and huge amount of fantastic material produced. I do a little WW2 history lesson in there as cartoons go to war and show the first Astro boy, some UPA and a few cigarette ads featuring the Flintstones.  I segway into the commercialization of cartoons to sell products and weave my way to the first computer animated feature "Toy Story".  It has been busy since I work this job and teach some nights and most week-ends but I will also add the caveat that it is very fulfilling too.

This week-end I am teaching my final drawing class of the semester and hive the final critique followed by the life drawing event Draw 'til you Drop……….. and I just might!!!