Not the skin thickening disease........ something much nicer.
The transformation of my elephant mannequin. 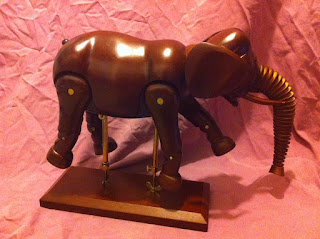 Here is the little guy after assembly. He has a dark brown wooden finish and is fairly glossy. I animated him  doing a walk first on 2's then I turned off the front light and allowed him to become a moving silhouette on 1's. 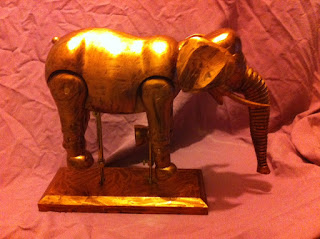 I covered him in a copper acrylic paint. I allowed the texture of my rapid brush lines to remain. I didn't even sand him first since any damage that lifts the paint will reveal the undercoat in an interesting way. Shiney! 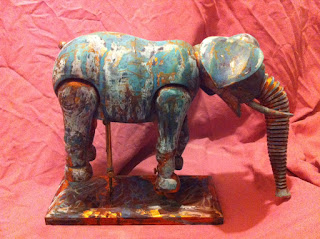 I quickly put on a thin second coat of copper and while it was still tacky I dripped over a blue  patina solution made of ammonia which instantly aged the copper. 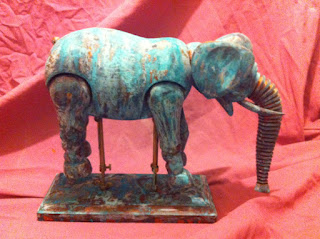 I did some touch ups and another patina treatment. As it dried it was gritty and chalky and I felt it necessary to put a protective coating on it so that it doesn't wear off too quickly during my handling for my animation. 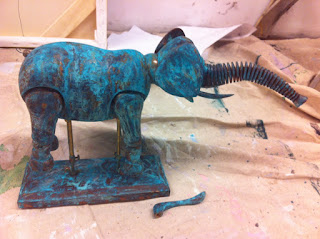 The coating may protect it but it did change the look quite a bit. It appeared to eat through in some areas giving it a deeper look and texture. I am pretty happy with how it is looking. I think I am going to silver leaf the tusks before I carry onto the next stage. And rub in some blacks to pop some of the crevices. I also re-attached the tail using a bent sewing pin. I intend on painting in the eyes in yellow and using plasticine disks on top so that he can look around.