Chinese new year quickly approaches and this year is the year of the Dragon.

I decided to make two large paintings of dragons.First, I hope one gets selected as a design for this years Taoist Tai Chi society T-shirt.  I have done their shirts for the past two years and hope that they use an image created by me again this year.  Second, I plan on exhibiting these new pieces at Motion Gallery in the New Year, and if I'm lucky they will sell quickly. 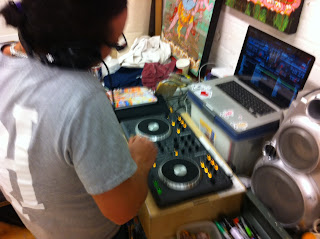 This is a dragon slayer! Dj LurkN spinning tracks in my studio. 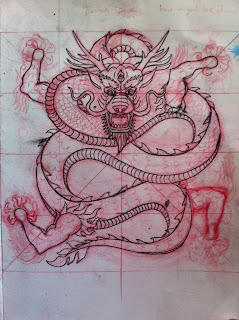 I created an original drawing to base them off of. This is the first of many in my newest Frosst Books sketchbook. I stretched two approximately 4 foot square canvases after my canvas building workshop. I acquired the frames for free and bought the 10 oz. canvas on the roll, way back.  I stretched them  and I gave them three coats of Chromacryl Gesso (the thick stuff) and sanded in-between each layer. It took about 5 hrs. total to create the surfaces in which to work. I sketched out the design in charcoal and gave it a light spray of workable fixative. 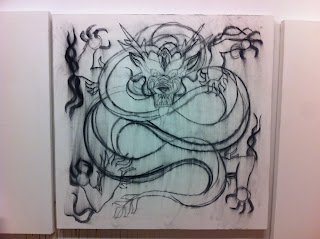 I worked in white gesso to blend in the charcoal and create some initial tone to work with.  I decided to do something a little different than I normally do, and work with a palette knife. I applied a red hue and blocked in the background. I applied it heavy and had fun doing it.  I even applied the paint around the edge of the canvas since I didn't think I'll be able to afford a frame for a work this large any time soon. Meanwhile, Cosmic and I were having an awesome time jamming out to his tunes. 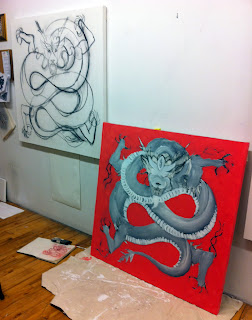 I flipped over the original drawing and broke in my new animation light table for the first time. I loosely traced onto the back the initial drawing so that it would face the other way. Once this planning sketch was done, I was still on a roll...... I sketched in the second dragons body onto my other canvas.  Instead of blocking it in with the white gesso as I had done with the previous canvas, I just sprayed it down with fixative. My studio was too stinky to continue working so I left for the evening. 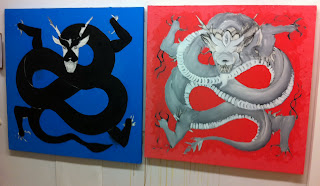 I blocked in a blue background on the second piece in with a palette knife. It wasn't my intention to be his and hers (Blue and Pink) but it was my intention to do a yin and yang thing.  The second dragon was painted in black with black Gesso made by Golden. I used a 2 inch brush to do it, it went very smoothly. 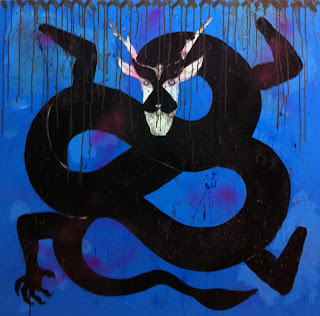 At this point it was getting late and I was loosing my edge. I painted in the claws but they looked so bad I had to paint over them.  Painting is largely experimentation and discovery. I don't even know where it will take me, I just show up and allow the process to unfold.  I decided to get into it and end the night off with some splatters and drips and blow off a little excess steam so that when I return I'll have new challenges to deal with in the creative process. 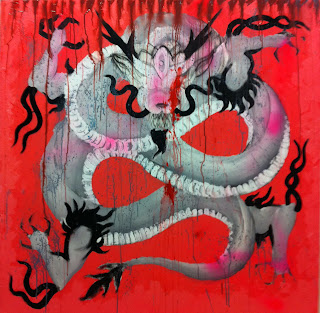 The red piece got the same treatment, I also used the black gesso as an underpainting for the fiery elements around the limbs and  the tentacle bits. I also sprayed some fluorescent pink marking paint to break up the space ad ant a little crazy with the splatters. A huge glob of red hit the eye and spilled down. Nothing to worry about. I spritzed the whole surface with water to soften it and allow for greater transparency of the dripping hues.

I am excited to see how these pieces develop into the new year, keep posted to see my progression =;)
Posted by BUNNY at 14:03