Just when things get tough, the tough get going. I had a very uplifting experience yesterday. I was picking up about forty dollars worth of streamers for Dunia's art installation project. I was downtown at Scotia centre. On the second floor one of the main retail spaces had been converted into an art gallery by local artist Edward Michell. <-- (click here for his website, but then come back:)

Edward Michell's work is abstract and material based, the opposite of my figurative and symbolic works. Our art couldn't be more different, hence the title of this post 'contrast and compare'. On the other hand, I couldn't have felt more on par with another artist. Usually, I glance over abstract art, but for years now, I have witnessed and enjoyed his creations, visiting his booth at every past stampede I have attended. I went into his current exhibition in Scotia Center and was happily greeted by the creator. We had a conversation which put a shine on my day and encouraged me to go back into my studio and keep at it. 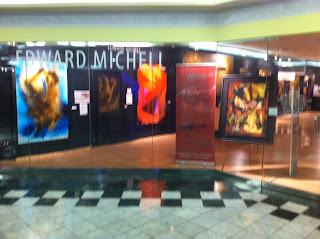 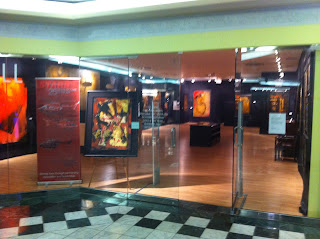 Edward was very welcoming, friendly and apt to share his experiences and stories. I have found it difficult to find successful artists in my field who are willing to open up. Artists I've talked to tend to border on secretiveness and avoid opening up, are socially inept or abrasive and arrogant. Often they are competitive. Edward Mitchell is an established artist with no hint of these character foibles. Then again, spending that much on an ounce of gold and being knee deep in tar sands probably keeps one humble.

He doesn't rely on grants, he said he has never received one. He even paid his way thru school, going part time an working throughout. He has taken a different route to build his career. Edward isn't with a gallery but instead has an agent. He is currently in over 32 shows, with upcoming ones in London and Toronto and of course in the mall right now and the stampede this upcoming summer. He emphasized that his success, in so far, has taken hard work and that he was very lucky! ( This is something that I keep hearing time and time again.) At the end of the day nobody gets a free ride, it takes hard work.


Here is a picture I found on the net of him working in his studio...

He told me about the provenance of his work and that each item is measured, the gold, the tar sands etc for each piece. He rented out the space which is close to $32,000, and is donating a portion of all sales to Starts. I cant believe he just told me how much it costs to rent a space in the downtown core. I have got to tell you, I had no idea! That is more $ than I have ever made in a year, and stores are having to clear that on a monthly basis. Wow consumerism.

Eward Michell and his crew did a great job hanging lights and blacking out the walls to turn the space into a functional gallery. The best part is he is there in person to field any questions. His pricing is not high as he is the gallery, so 50% is not tacked on top of everything, making the price tag of the work reasonable. Considering the materials, the cost of renting this space and a studio in this city, the size of the supports and frames and the need to wait a year for the tars and oils to cure before they can be exhibited. His works are a steal! 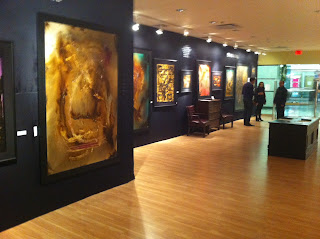 It's a small world, and even smaller in the Calgary arts community. E.M. and I have quite a few things in common it turns out. He just so happens to have stretchers built by my friend Chris Melynchuck, who passed away from cancer, he built the best stretchers ever. (type his name into this blogs search to see my posts about him) Edward has a studio across the street from mine, close to my place of work. He too is a graduate of ACAD. He is also a trail blazer, doing things his way.

When I told him I was a struggling artist, he said he saw my show at the Untitled Society and added that I was very talented, whether or not its my work he is thinking of, the supportive sentiment is greatly appreciated.

It's nice to be able to talk to another artist, one who has experienced a greater level of success. I am breaking into the business finally, and need as much guidance and support ad I can get. It is uplifting to know the dream is still possible! You learn as you go, there are good days and bad, some are helpful others are confrontational, it's nice to see someone with success willing to share his experiences.

If you'd like to see Edward Michell's work in person, you can see it Monday -Saturday on the second level of Downtown's Scotia Centre near the escalators. Better yet, if you can go purchase one of his works....,do it, and say I sent you =;)
Posted by BUNNY at 12:39