Draw 'til you Drop

Once again it's time for an intensive drawing experience, the Draw 'til you drop event hosted by Mark Vazques-McKay. Get up early on Saturday after an arduous journey back from Vancouver Island. I made it back just in time to attend Doug Swinton's Friday night demonstration, immediately followed by the Emmedia/CSIF/Quickdraw Animation Society X-mas party. So I may have been super rusty this morning but I made it on time to draw. As they say.........."No rest for the wicked" 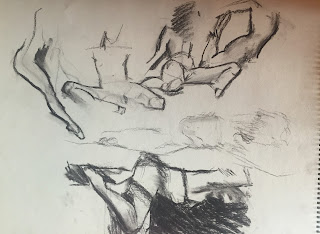 The first model was a ballerina who did some quick warm up gesture poses, some on point. 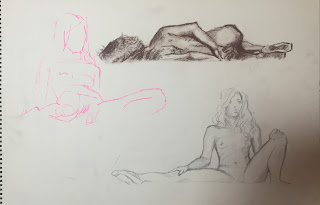 I tried a variety of materials and set ups at the beginning in order to shake me out of my stiffness. 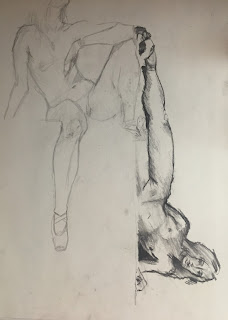 It felt as though things were working against me, but then I discovered the delicious coffee the venue provided when I made a donation to the woman's shelter. 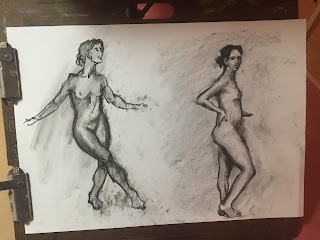 I tried some new charcoal from Japan on the Mellotex paper I've had in my studio a while. 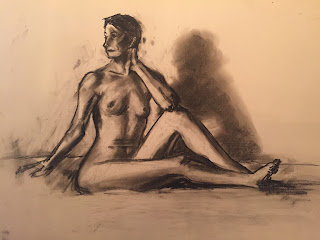 And then went for a warm tinted paper when the pose was held for a longer period of time. 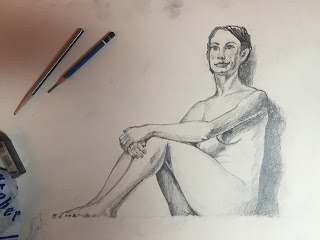 This one was graphite pencil on heavy drawing paper, and I got frustrated at the end when I couldn't get Eva's likeness correct. Instead it looks like a sci-fi captain. 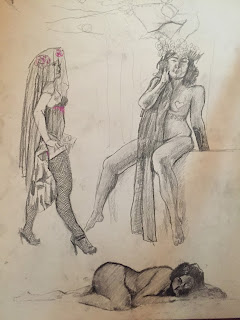 On the other side, there was a simultaneous set up of burlesque dancers in costume, I did more drawings of them but only photoed this one as it turns out. their costumes were spectacular and fun to draw. Look at the obsessive detail it takes to render the fishnet stockings. 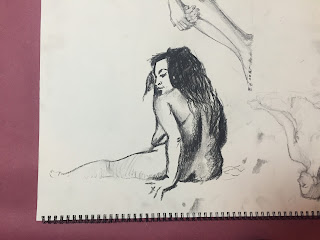 I quickly got down some values for the newest models warm up pose. I should mention we got free leftover turkey diner from the locations Christmas party, major bonus to attending this event as I have been out of town and have no groceries. 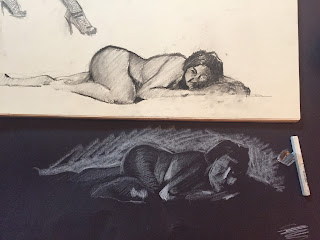 Here I played a little with white chalk while there was just a little bit of time left in the pose.

for my final drawing I used some toned Canson brand paper, the white, graphite and a fluorescent pink acrylic paint pen. I am looking forward to tomorrows long challenge as well :D