KALI - Goddess of Time and Change

If you read yesterday's post you are probably licking your chops to see what developed next.... 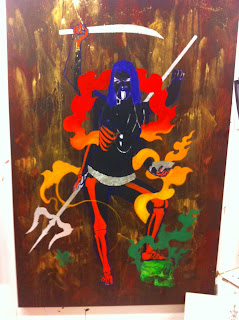 After much pondering I took a big leap. I knew I wanted the green skull to be engulfed in flames and I knew I wanted to add a dancing ribbon around the figure. After some soul searching and plenty of gazing at the piece I decided to do a graduated ribbon of partial flame. 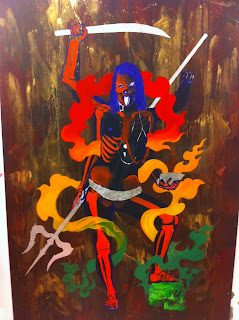 Painting the flames/ribbons takes a lot longer than I usually expect. I work right on the Canvas so there tends to be a lot of wiping away and repainting to get it the way I like. I used a series of bold colours right out of the tube as the base blending dark cadmium to cad yellows to green. 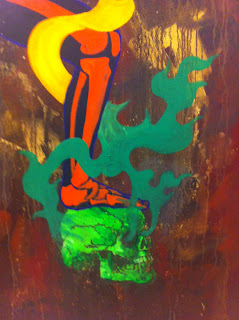 I painted the flames to come out the the green skull and have some of the flame overlap the leg, this should create a pretty cool illusion when viewed thru the 3D glasses! 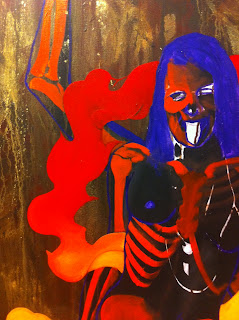 I continue to block in the light cadmium red bone structures, which end out looking like a neon orange once painted. The blend of the red to orange ribbon can be seen here and some of the internal ribbon shapes unfolding are beginning to be developed. 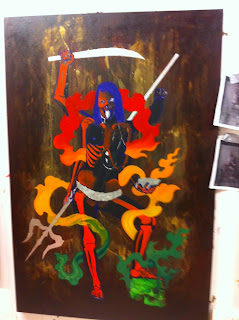 I began to rub in a dark brown around the edges of the camera to help punch it up further. 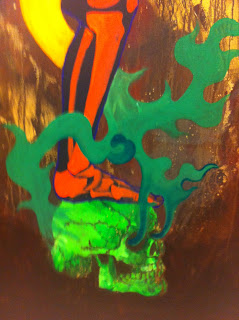 I go back into the skull with a dark green, Viridian right out of the tube, to punch it up further and give it more shape. 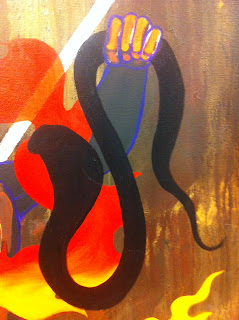 I then painted a silhouette of a king cobra in pure ivory black being held above the silver bowl in Kali's outstretched and foreshortened grip. 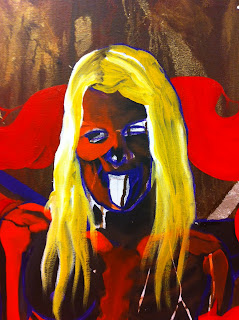 I blocked in some of Kali's hair. 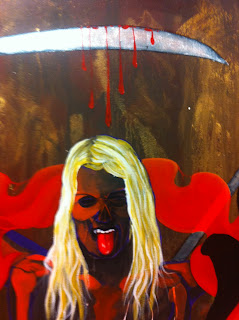 And then put in softer lighter high lights. I did some work on the silver foil weapons and added some drips of blood as well as the tongue that is sticking out of the mouth. 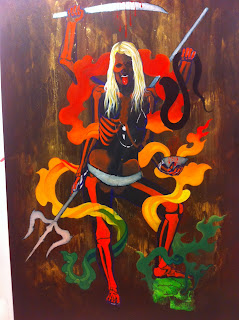 I outlined and rubbed in the silver weapons with a Bob ross Mountain mix. I also added in details on the ribbons, painted in some blood drips and a heart in the bowl, etc. This shot is to give a general idea about how the entire piece has developed from figure to ribbon. 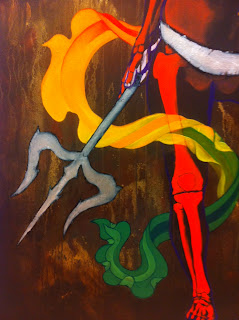 This detail shows some of the undulating folds of the ribbon and how I use various outlines and the middle dark ribbon. I really like how the translucency of the ribbon over the femur turned out.