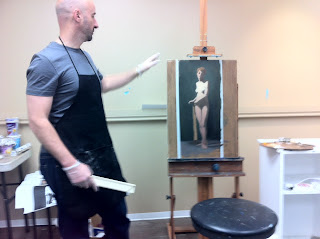 We began the day with a demo by Martinho Corriea on the subject of first painting. The first step is oiling in the painting from the previous session. This is done with a 50/50 mixture or turpentine and linseed oil. This stage is where largest forms are modeled in the round. For example treat the leg as a column, but also pay attention to the fact that there is still the fall of light from the previous session. The torso becomes a rounded mass and you still work with simple light to dark and a large brush. 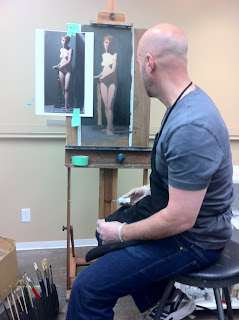 At this stage there is no work into the dark areas. "Keep the darks thin and the lights thick". The objective of First Painting is to model the larger forms by trying to keep to the proper value shifts. This is why the fall of light is there, like a map you paint over but it helps you keep the values intact. It takes a lot of concentration and a few tricks with perception to get this right. 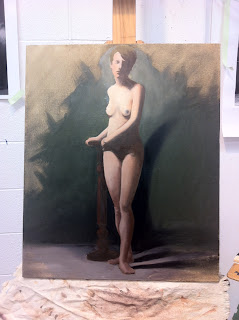 My rag is under the canvas to give me a surface to wipe my brush clean. As you can see the form of the legs is rounder and there is a barrel shape to the chest. The bed bug line is still there and I had to go in and darken some of my shadow work. The largest forms are beginning to be described. 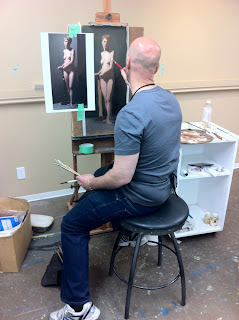 Martinho continues to work on his piece.
I took a lesson and stuck my reference much closer to my canvas. 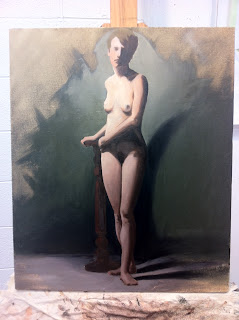 I worked on the background gradation a bit more. I punched up the shadows a bit. I also put in a few lighter tones into the navel regions shadows. My paint was looking scraggly and Martinho's advice was MORE PAINT!  I have always been so conservative with my use of paint, but as he says paint is cheap (at least some colors are). At any rate he is absolutely right! I'm so used to not using much because it dries up in between sessions, and by being cheap, I've been rubbing out rather than applying thick, a habit that needs changing if I want rich looking canvases. 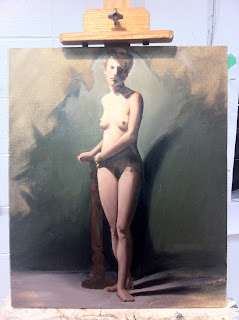 I was very frustrated learning to work in a new way and not being as proficient as my mind thought I should be. By the end of the session I wanted to be done more. I have a new found respect for the subtlety of light and shadow and peoples ability to render great realistic looking tones in oil paint. I'm happy I got out of there in one piece! I took out my frustration in Martial arts class afterward.