After coming home from helping out on Grant''s Quonset raising. I was super tired, laid my head down and at about 8-9pm I got restless, got up and decide to head to the studio. I worked on my piece for the upcoming unerground show and created a new series of small graphical works inspired by Haida designs (more to come on this in a future post). It felt like 11pm when I realized it was about 2:30 am. I headed home, pumped from the successful night in the studio. But I needed to get in between the covers, and quick. I had to help out with the Quonset the next day and 4 hours of sleep wasn't going to cut it. Although, it did, in this case. Sunday morning, I got my ass up, and was the first one to show up to help with raising the barn. 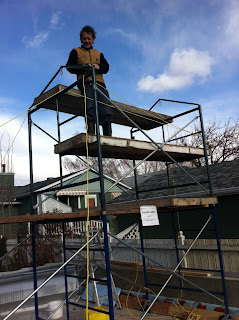 Grant, pulling on his rope. 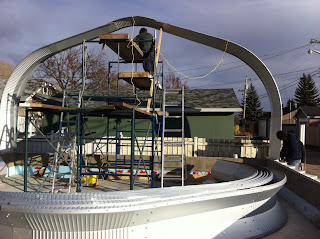 You can get a sense of how big this thing really is. We put it up old fashioned style: man power, rickety balancing rigs and tons of rope stabilizers. It took all day and the metal was bending like a snake. It was cold and we were undermanned. For a bit there I was pretty worried we wouldn't make any headway and that someone would get their fingers taken off, or worse decapitated. 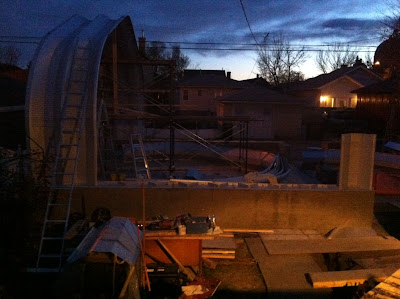 By the end of the evening we had two ribs up which offered great stability as the wind blew. I spent the last bit of my night up the ladder on the left screwing in bolts. Afterward I was able to enjoy some superior fried chicken and a bit of warmth. I relaxed the evening away with some good eats and both TRON movies, back to back.