I will be hanging two new works at the Upcoming Pin Up show at the Untitled Arts Society Satellite Gallery this week.

Pin-ups are mass-produced images of idealized sex symbols, intended to be "pinned up" to a wall. They are cut out of magazines and newspapers, or postcards and calendars. From the classic charms of Betty Garble, to the fetish modelling of Bettie Page, our version of the "pin-up" has changed over the ages and has accumulated over a century worth of history. 35 artists have worked within the confines of a "poster" format, showing a diversity of artist's interpretations through the themes of feminism, sexuality and popular culture. 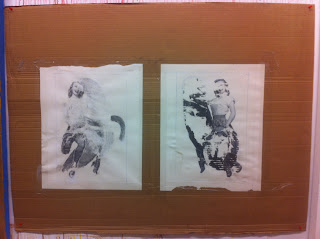 The works are supposed to be 11 X 17. I decided to pint two pieces on canvas paper.  First I did a little online research and gathered some reference photos, did a little photoshop tweaking and printed out some reference. I cut them out by hand and merged the laser printed elements together so that I could do two different methods of image transfer. The method on the left was done by brushing acetone on the back of the paper and burnishing it with a spoon, then lifting of the paper. It worked fairly well, but stronger acetone and a photocopy over laser printing would make it work much better after a little experimenting. The second one was made by brushing matte medium on tot eh canvas paper then pressing the print face down
onto the surface. After the clear medium dries you can wet the paper and rub it off. 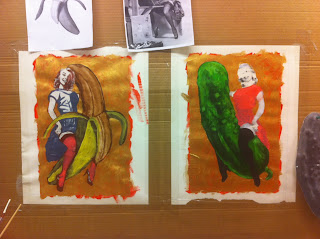 One the images are on there, which saves time composing and drawing, I coated them with more clear medium to protect them.  I brushed in a background in bright red and followed by covering it with a gold colored Golden fluid acrylic. I blocked in some darks as well as most of the pickle.Overtop of dark brown I dry brushed the yellow that makes up the banana peel. I left the skin as I ran out of time that evening. 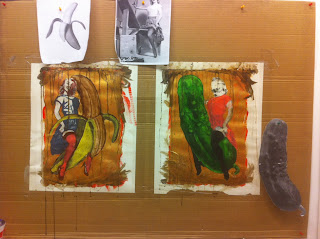 You can see my references here and how I taped the canvas paper to some cardboard then tacked it up onto the wall to work. This also held to keep the Canvas paper from wrinkling as much, the same thing you do with water-colour paper.  I decided to roughly brush in some dark brown to have a dripping vignette. 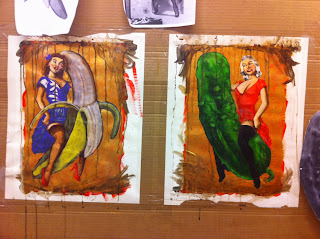 I added skin tones and some shadows in the dresses. I started placing the ladies facial features. I also dry brushed in the banana and lighter areas of the peel. I made her shoed bright red, I intend on adding sparkly red glitter to her shoes, like Dorothy's from the Wizard of Oz.  The next step is to add more details, pattern the clothing, add highlights, and sparkles to various elements. I may also outline them again and add more gold to the backgrounds. I can twit to see how they turn out!
Posted by BUNNY at 13:09