The next stage was a big one, I spent some time on the blue dragon adding the spine in a frosty aquamarine tone. 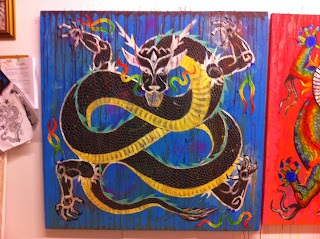 For the red one (below), I filled in the claws and did a dry rub over the tentacles.  I added the flames around the legs and arms and shaded them with orange and red. 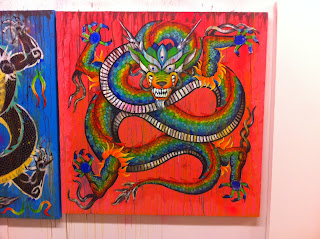 I also spent about 4 hours, meticulously highlighting each an every scale with their respective hue family. I made the colours in glass baby food jars so I could store them longer and use them on the other piece.
I addition I used a sharpie to add a dark line to each and every rainbow scale.  It took tremendous focus and concentration but I am really happy with how the scales turned out on this piece. 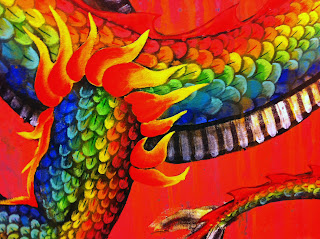 I also used a filbert full of zinc white to score in a rounded edge on act belly fold. Zinc white is on the cool side and more translucent than titanium white but it still works to pop the scales without being to hard like a highlight, 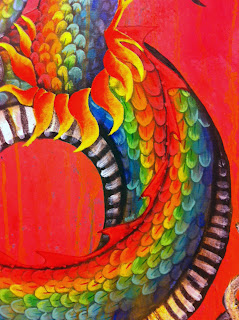 I am still contemplating how to proceed with the other ones scales, something similar I think, but working over black presents some challenges.