frog and a bird but no bees

While watching a movie, I usually pull out my sketch book an barely pay attention, instead I like to draw cool stuff. (The film for the frog drawing was 'Elegy' in this case, with Ben Kingsley and Penelope Cruz followed by the bird and UFC 21 which was by far more engaging.)  I colored these in with Copic markers, The colors are what makes it exciting for me, I am addicted to them. 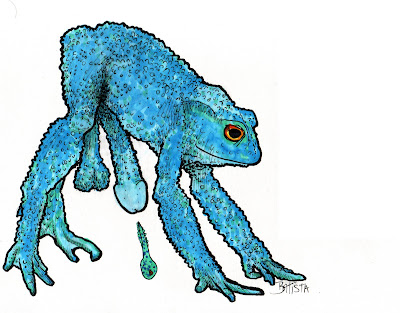 Tadpoles look like sperm, or do sperm look like tadpoles?
Either way, I think it is rather silly, visually ;)

I actually drew these on the same page but scanned them separately. I was inspire to draw the bird based on the color match possible between the two drawings, I think they make a nice pair together. But you cant breed a bird and a reptile ;P 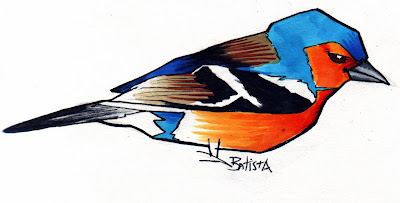 It was really great attending the Calgary Comic and Entertainment Expo yesterday. I picked up a bunch of books to inspire my artistic pursuits, met some rad people and decided to purchase a booth for next year. I am excited to be part of the event and to get some new exposure. And I have a whole new direction and desire to get more colorful markers, prints and portfolio work done in the upcoming year. Yeah!
Posted by BUNNY at 07:47

I really love the bird. Do you or would you sell prints? Thanks!