Giddy Up! Time for a rodeo.

Well, in my town... Calgary, Alberta, Canada
it's the season to throw a parade and the "greatest outdoor show on earth",
Yes, the Calgary Stampede and Exhibition for the mistreatment and torture of animals for entertainment and profit, is here again!

I didn't get much sleep last night, this morning the snowbirds flight path was right over my house and last night I was kept up late by fireworks, which I can see from my bedroom window. I love fireworks.  I also like horses, and a bunch of other cowboy stuff.........and so,  I convinced myself to get up, to get out and get some sun an see the talent at the tail end of the parade.  (no pun intended) 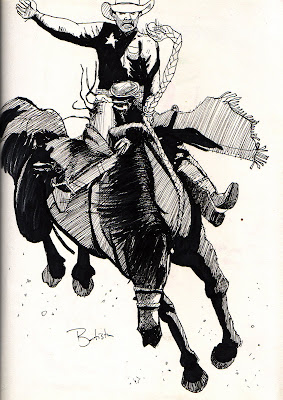 I drew this with a 0.3 Copic multiliner and the fill was done with the brush pen end of a #110 Copic sketch marker.