If you live in cow town or any town that gets the opportunity to go to Bodyworlds and like to draw anatomy, this is the place to be! I think exhibits like these are very important for artist's to attend.
This is my second time going, it is well worth the price if you walk out of there with some good drawings! I just brought in my sketchbook one pen and a mechanical pencil to do these studies. 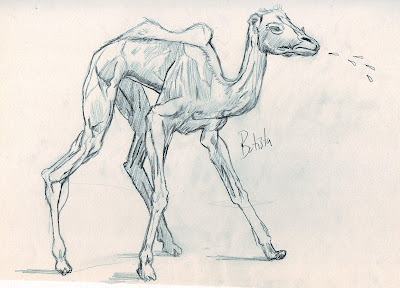 No food or drink allowed, even if you crave beef jerky for some odd reason. I don't really have an appetite when looking at plastinated cadavers. This one kid in there kept saying, "they keep the meat on so they don't fall over", I turned and said it's only MEAT...... if you're going to eat it! and cracked a wry smile. Note: There are no places to sit and it can get very crowded so it may be hard for to draw, for some. 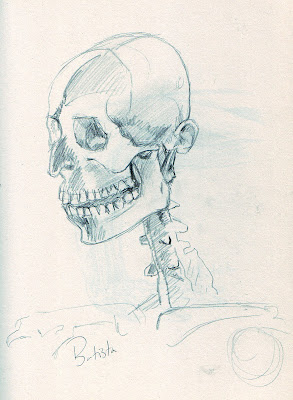 It astounds me at how uneducated/uninformed the average person is about the workings of their very own body. I mean really? Do they not take interest in the mystery of their very own, immensely complicated design and functions outside of this one spectacle. I was telling people what the parts were as they pointe to the liver and told their kids it was a lung. I hear " What's that?" from both adults and children alike. 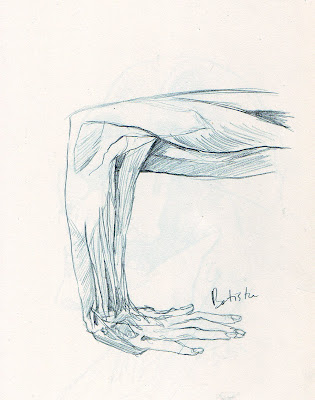 Another interesting thing to do is watch people making faces as they emotionally react to each display. A lot of disgusted looks all scrunched up like Popeye drinking bitter beer. The seniors tended to have more interest in disobeying the signage and touching the specimens an explaining to one another their friends or their own surgeries, injuries an diseases. They treat the specimens as other, as if they are only a spectacle, unable to relate themselves to their biology, keeping distance between the body they have and the display bodies a s 'other'. 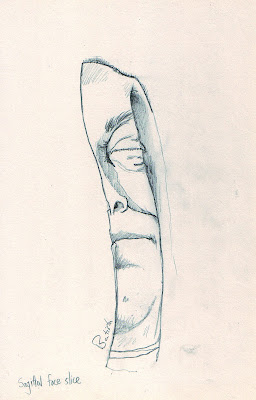 While having a green tea in the cafe I over heard a daughter ask her mother "Is the soul outside the body, then?" Some of the kids were really smart. I watched one 7 year old explain to his schoolfriends the nuances of the workings of the digestive tract, he only missed naming the duodenum. Maybe his dad was a doctor or he watched a lot of educational television......regardless, my faith in humanity had been restored. 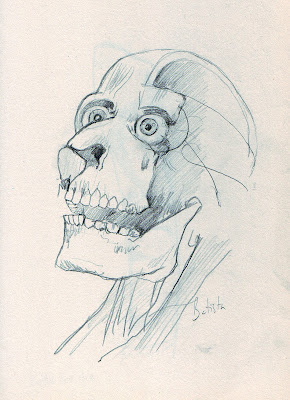 It may not be the best place for the little ones. You may not want your daughters to be engrossed in the penises;P Vegetarians an the faint of heart may have a hard time with it as well.

As ART and SCIENCE..... I feel the display is very effective, maybe a little garish and some of the displays were poorly mounted, but it was awesome to see animals, like this camels (infant camel is the first drawing on this blog). Sooo cool. It brings it to a new level. For so long religious groups such as the catholics have held relics of their popes etc. in the same way,  doctors an biologists do the same thing and the history of artist's learning about the body have filled volumes, now it is a little more accessible. 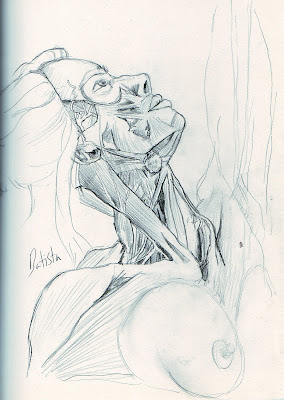 Our bodies are amazing. What an intricate, complex an mysterious organism. Everything fits together so well and has a specific task or function that works symbiotically with the rest. Totally amazing!
The main thing about the Bodyworlds exhibit for me, is it not only brings about awareness and questions about our own biology, but more importantly........ I think it helps in shaking up our complacency an makes us faced head on MORTALITY! And that alone is worth the price of admission.
Posted by BUNNY at 14:04

These are incredible!!! Can you help me do my final project in anatomy..because I think you can get me the grade I want...YOU MY FRIEND ARE GRADE A!!!