I have been off grid, literally. Took two weeks in El Salvador, which is why I haven't posted, no internet. 3 hours from the airport and 45 min. down a dirt road, passing skinny street dogs and fortified walls, finally to arrive, late night at the gate of La Tortuga Verde. But before we get to the sunshine and   sea, I needed to brave the cold of Calgary and get to the airport. 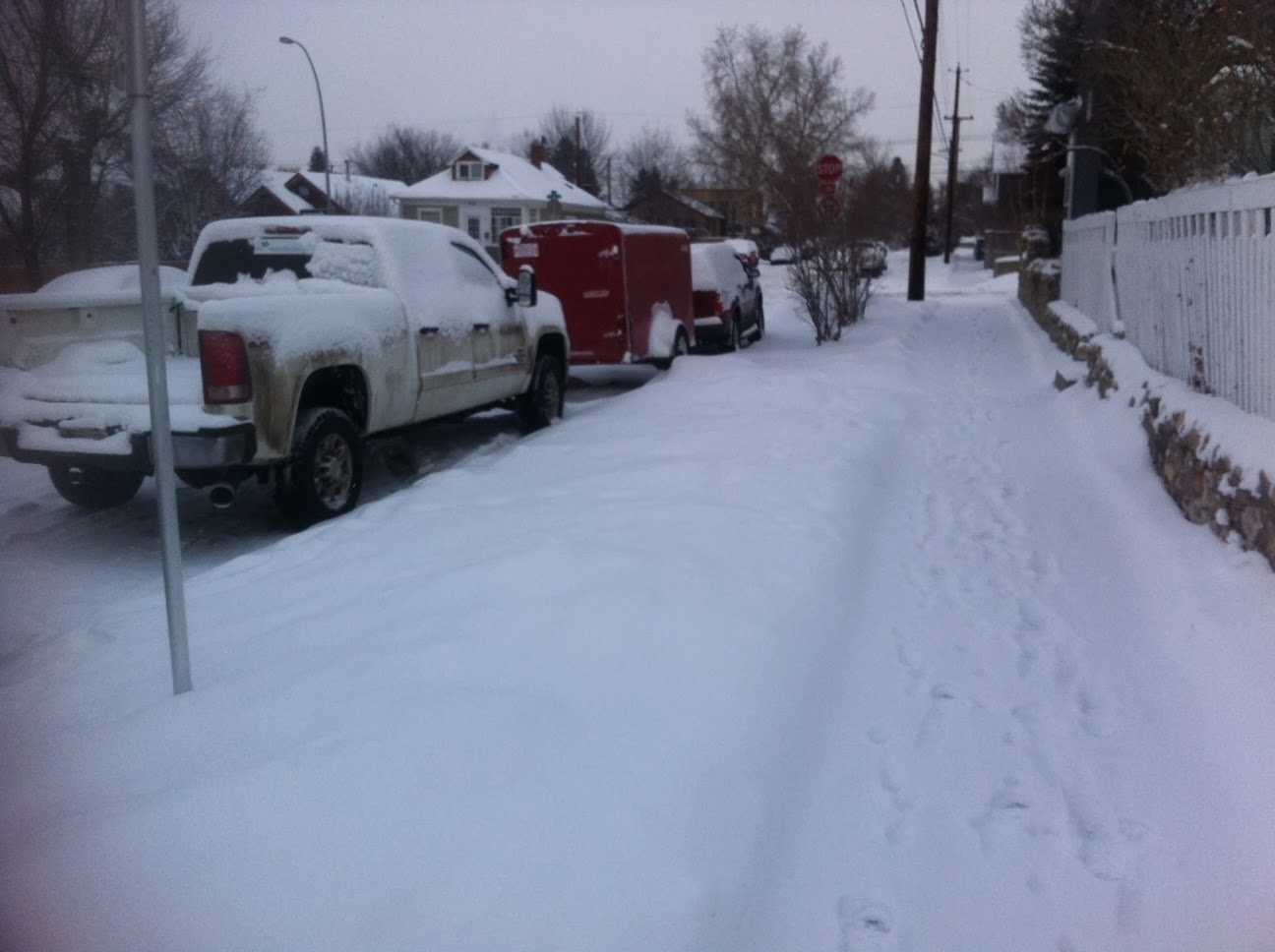 The day I left Calgary.
It was a crazy night of packing. I had just moved out of my studio and still had two days of work before I had a few moments of free time to pack before getting on the airplane. Luckily, I have good friends who offered to drive and pick us up from the airport and to help me out and grab things in a mad rush, all I left with was what I think I needed and a toque for when I come home. I wouldn't miss all this snow and gloom. 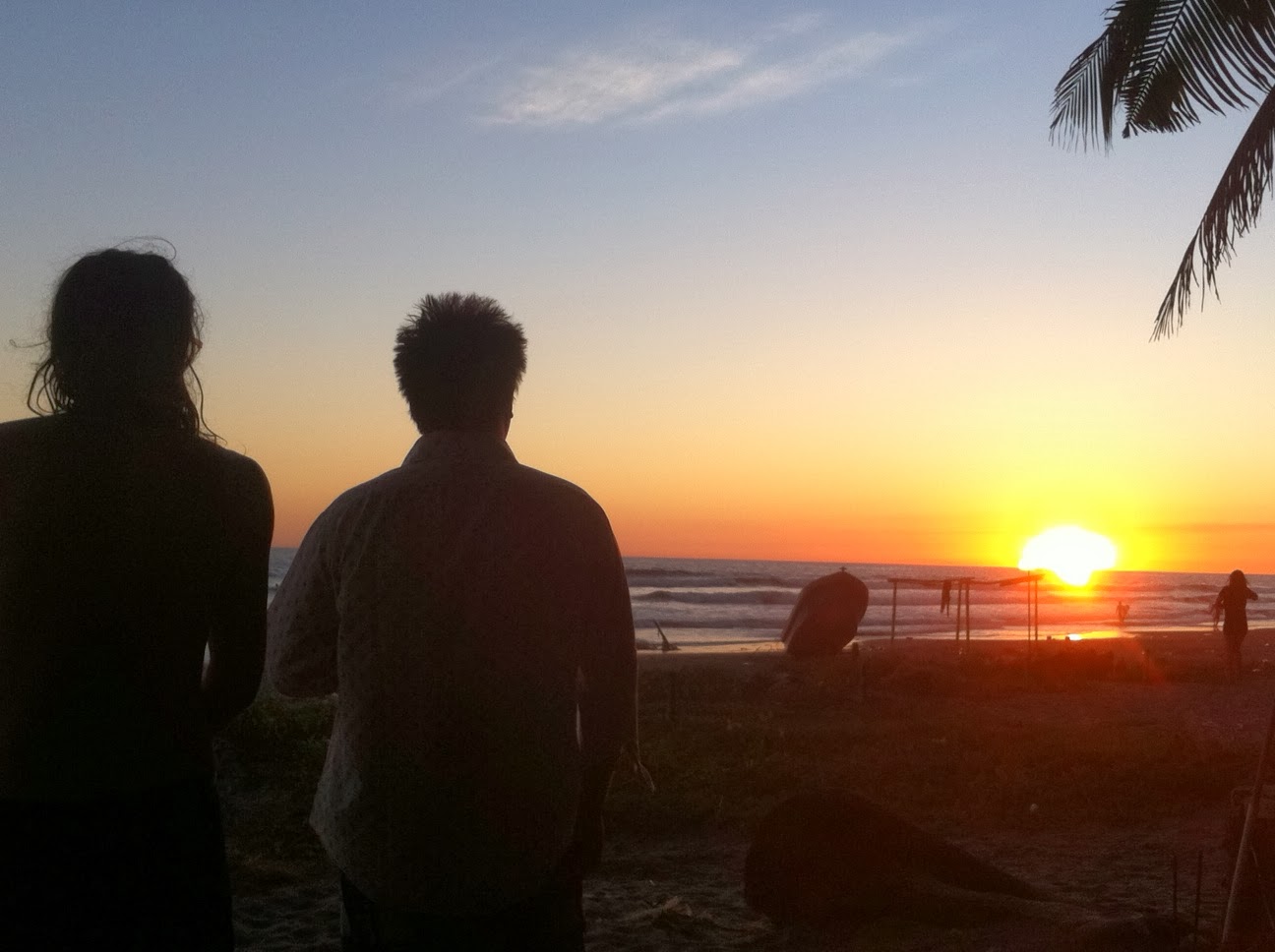 The first sunset as seen from the beach.
I really didn't know what I was in for, severely unprepared but ready for adventure. No habla espagnol and yet somehow we got to the edge of the world. People here on average earn $10 per day. They use US funds and don't expect much in the way of tips. Our accommodations are simple and you can't flush the toilet paper in Central America. Instead, you need to put it in the trash bin beside. We sure are privileged in the north.  The view is stunning, facing south, a perfect surf spot, the ocean is not more than 100 meters from my door. It is hot as hell for someone acclimatized to the snow. 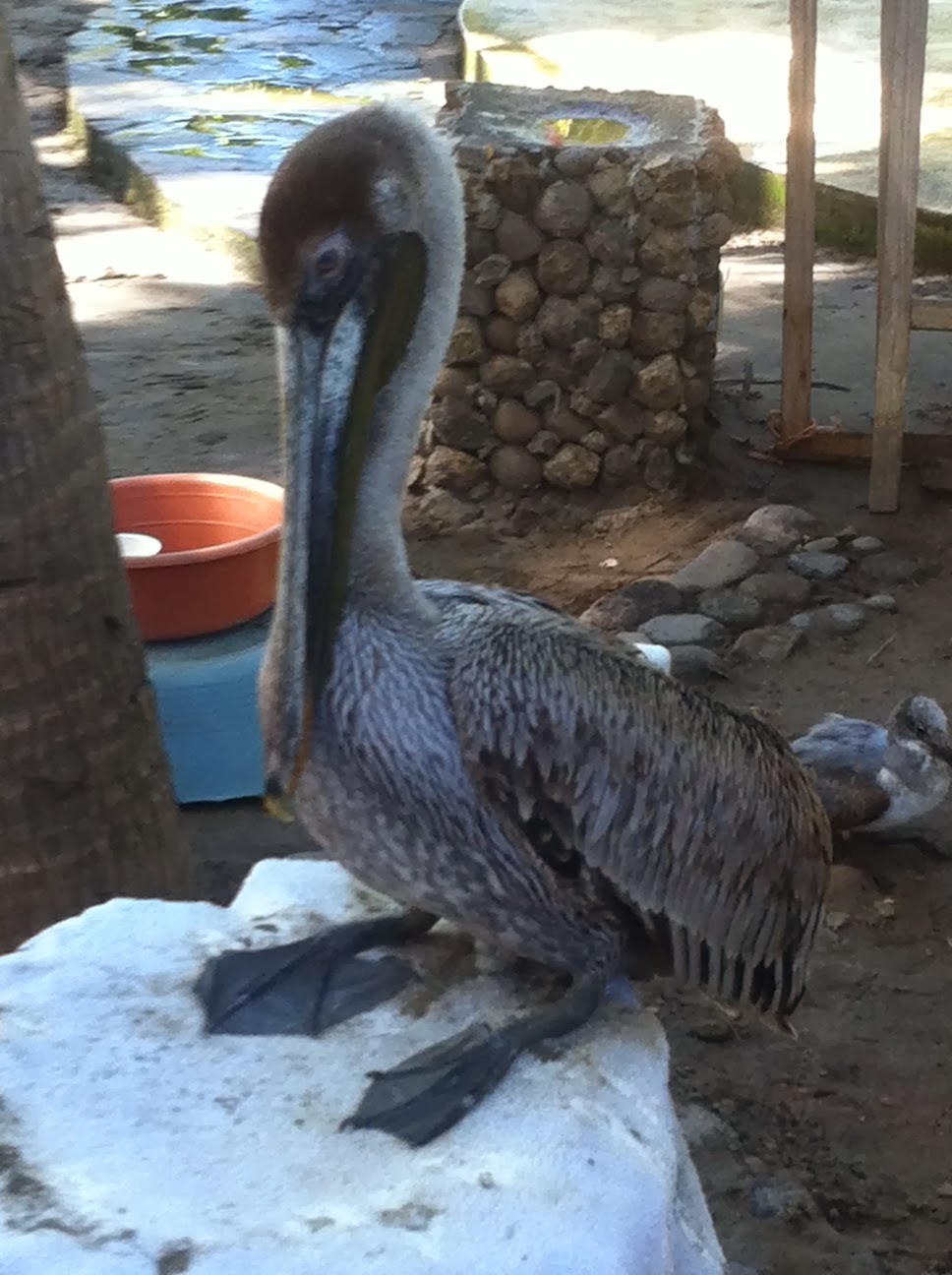 Here is the second bird they found on the beach that needed saving.
The hostel that we stayed at has a mission to help save the turtles and other wild life. At La Tortuga Verde their eccentric owner, Tom, has the biggest heart. He is willing to leap out of a boat to help nurse a suffering pelican who may die without assistance. Sometimes the birds knck themselves out when they dive down to catch fish. This surly pelican was starving an unwilling to eat. Its neighbour in the baths they have for turtles and other creatures needing assistance was a pretty messed up seagull. By the end they were grooming themselves and heathy enough to be released back into the wild. 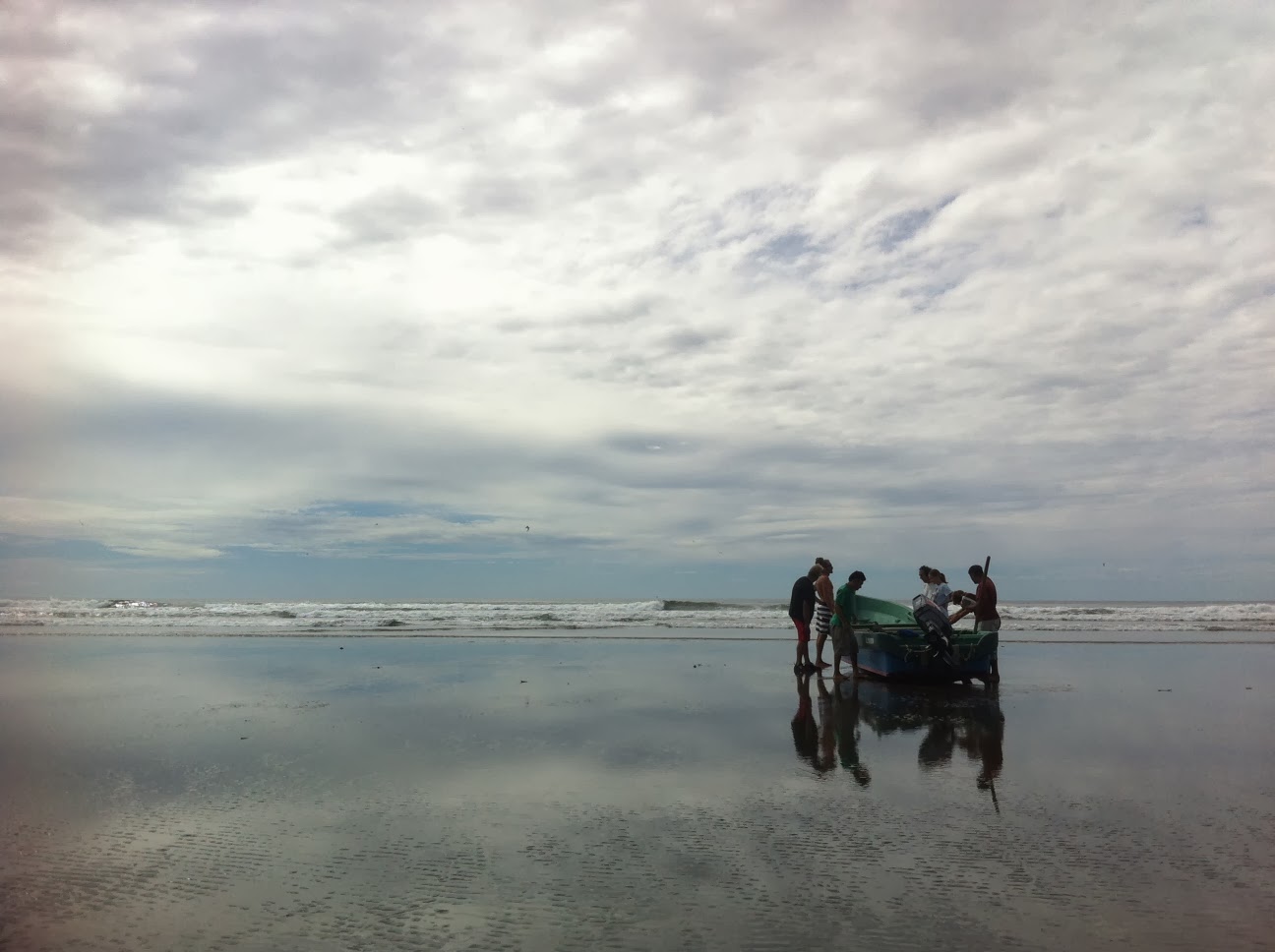 Prepping the boat for adventure.
We had arranged a boat and captain to explore a nearby island near to Honduras and Nicaragua. This group takes a while to get anything done, big numbers usually do, So by the time we were ready we had to drag the boat along palms to get the boat out to where the tide had dropped. We went out on the ocean and even made spit stoop to a local fishing town on the way who had a guarded navy port and very friendly locals. It was quite the leap for me to see how people live in this part of the world, mind blown! 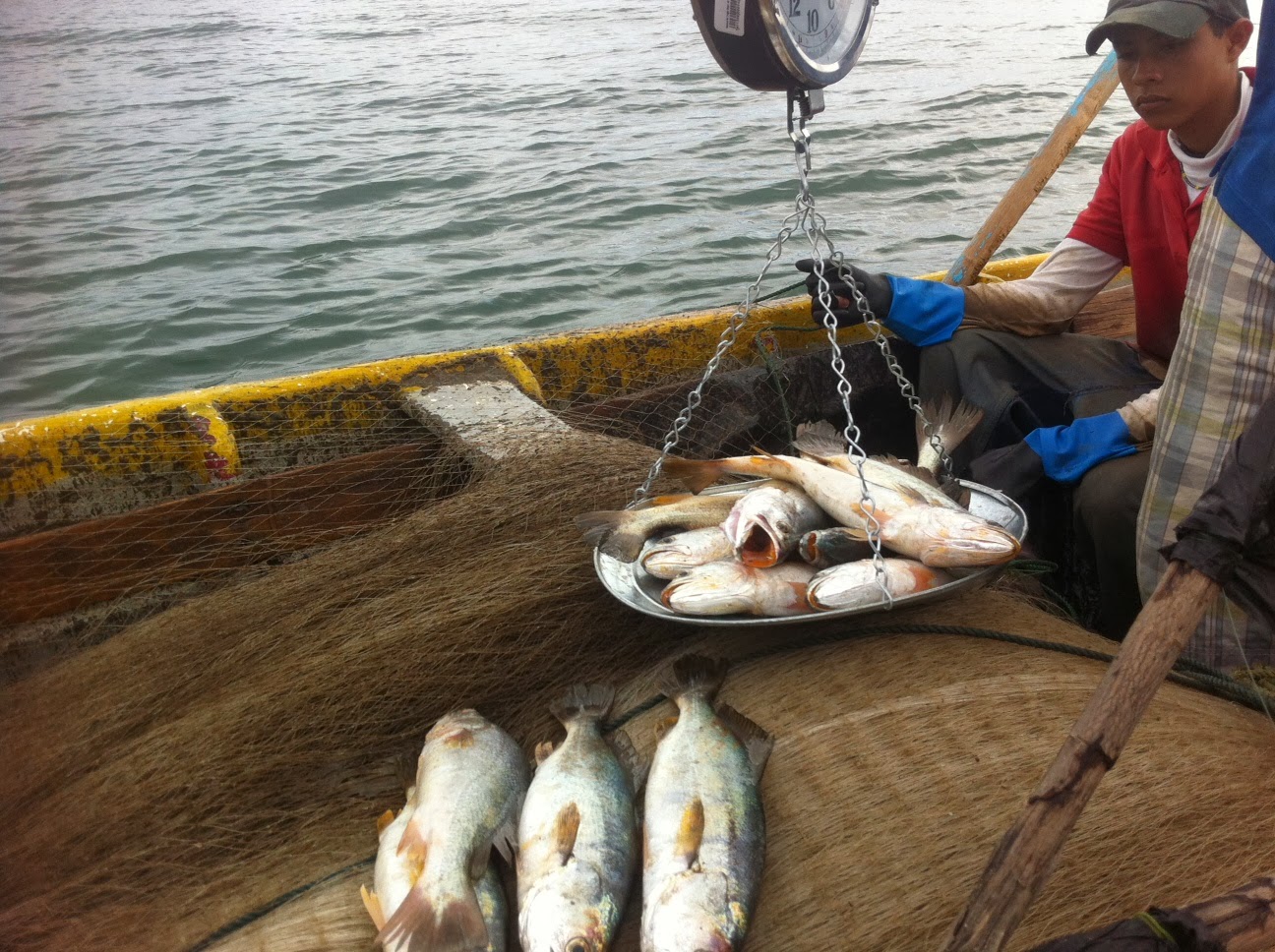 Weighing fish for sale by these fishermen.
On the open sea we pulled up to a few boats to see if the fishermen had any catch for sale. Eventually we got to these guys. If you can believe it, all these fish only cost $10. When we arrive at our deserted island destination we will build a fire and cook these bad boys up. 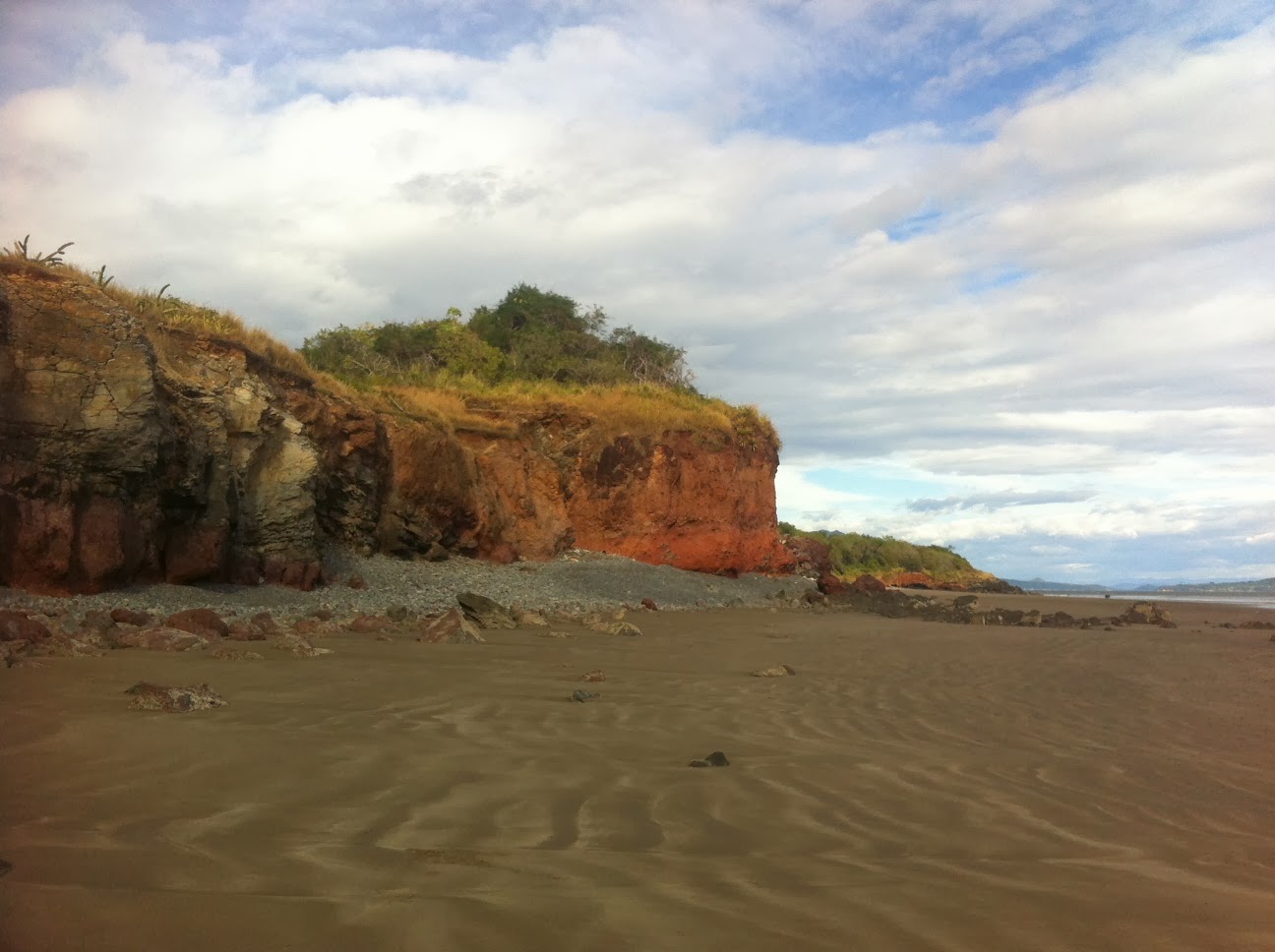 The gorgeous island destination for lunch time.
We arrived at the island and I began to explore. There is so much garbage washed ashore everywhere I go in El Salvador, the priorities are different here. The landscape is beautiful regardless. I saw many species of bird and some quick scurrying crabs. 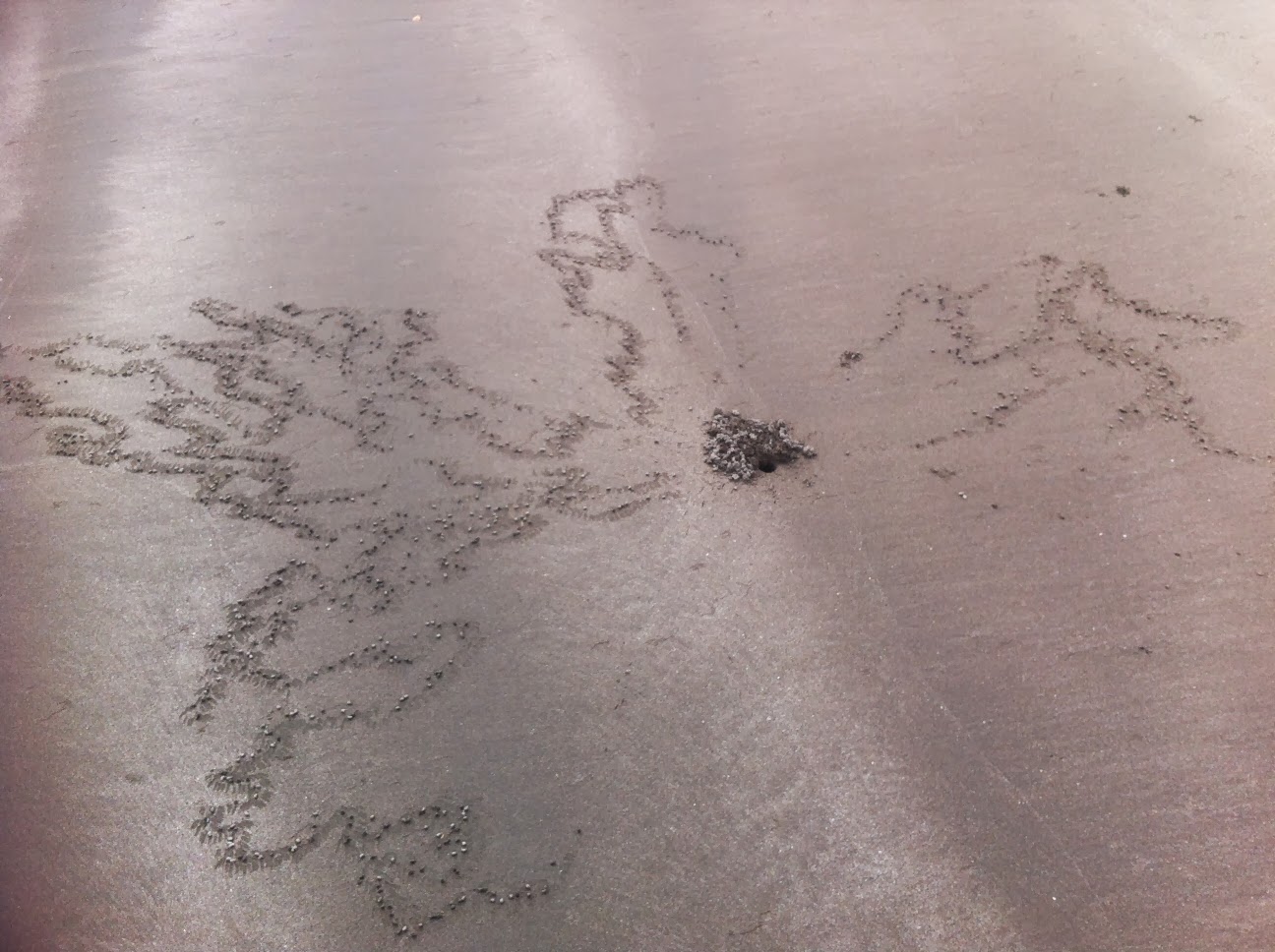 They make theses tracks and hide in these burrows along the beach. 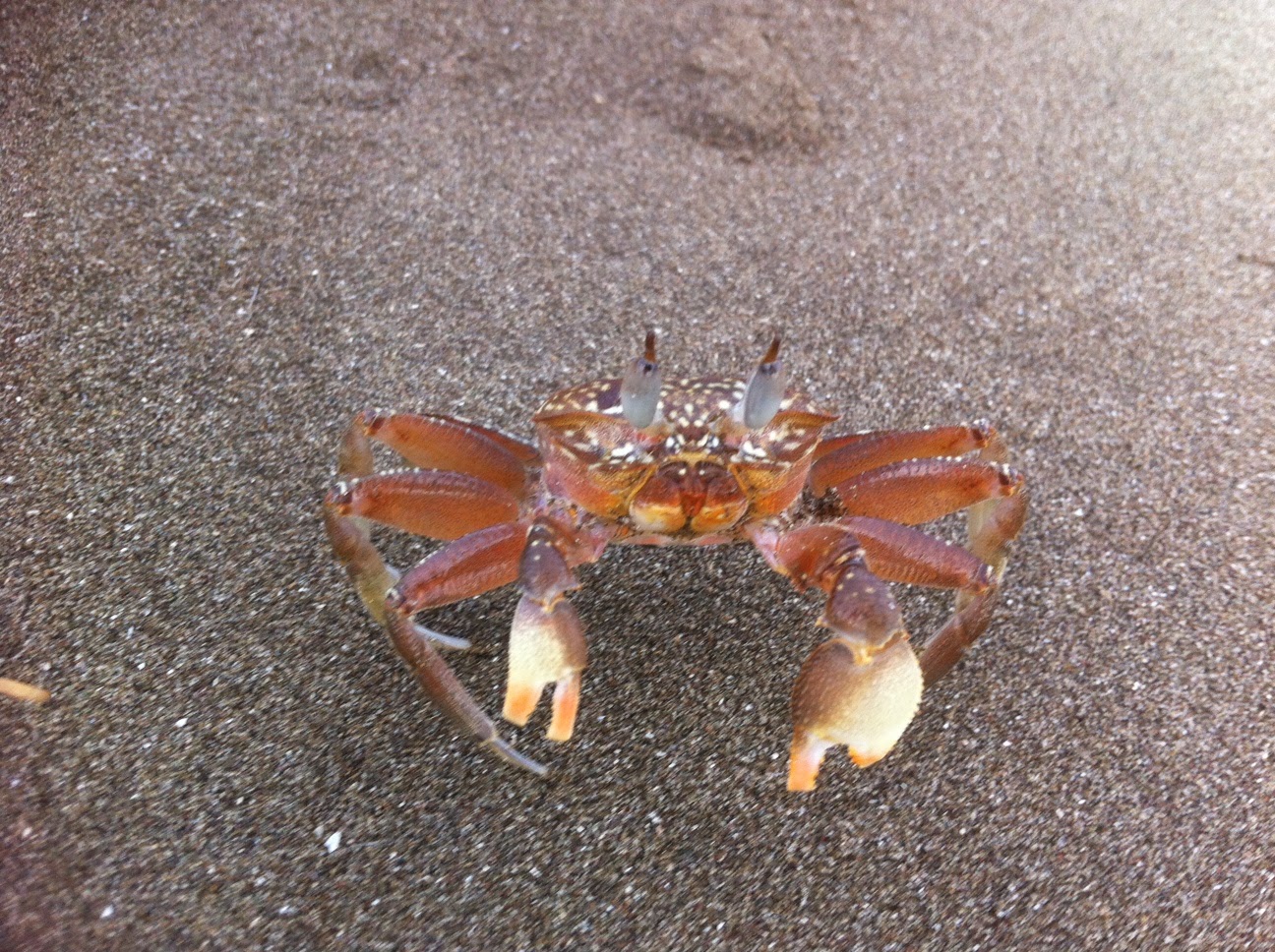 Here is one of the beach crabs.
It took a bit but I managed to chase one down and was able to snap a shot. This little dude also went into attack posture which was intimidating irregardless of the massive size difference between us. 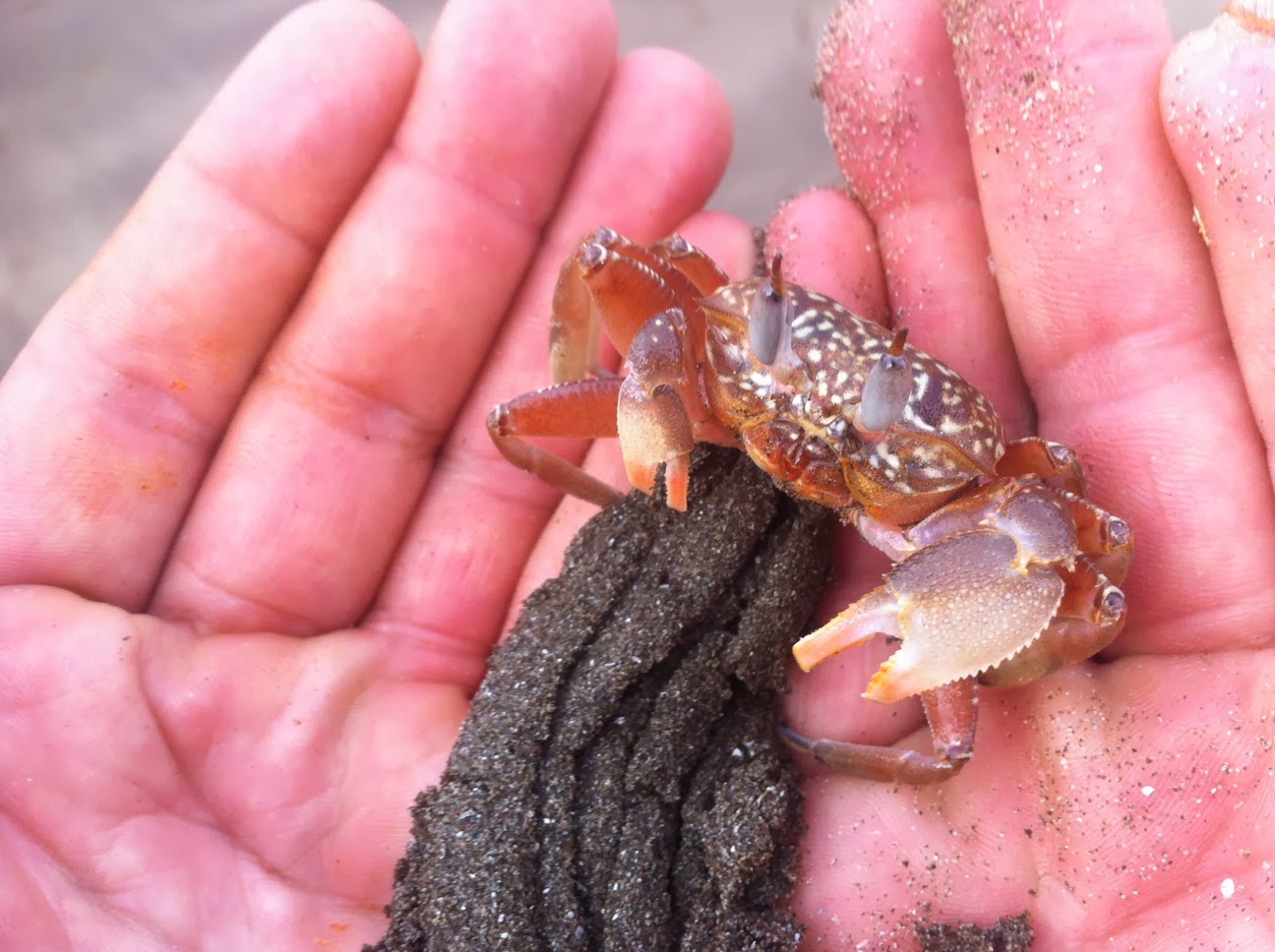 Here he is after being run down and caught. There were all sorts of rocks and shells, and lava formations, birds, trees and cacti on this beach. 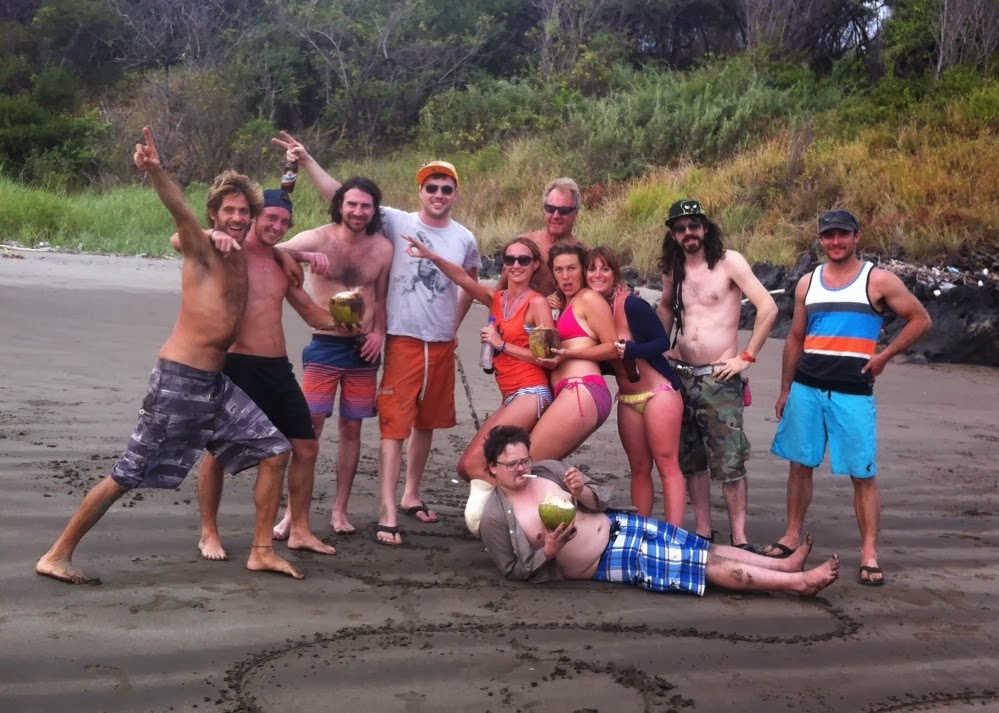 Here is the boating party after a large meal of grilled fish and too many Pilsners.
You can tell who the travellers are and who just came from Canada. This is a lot of people to cram onto such a small boat. 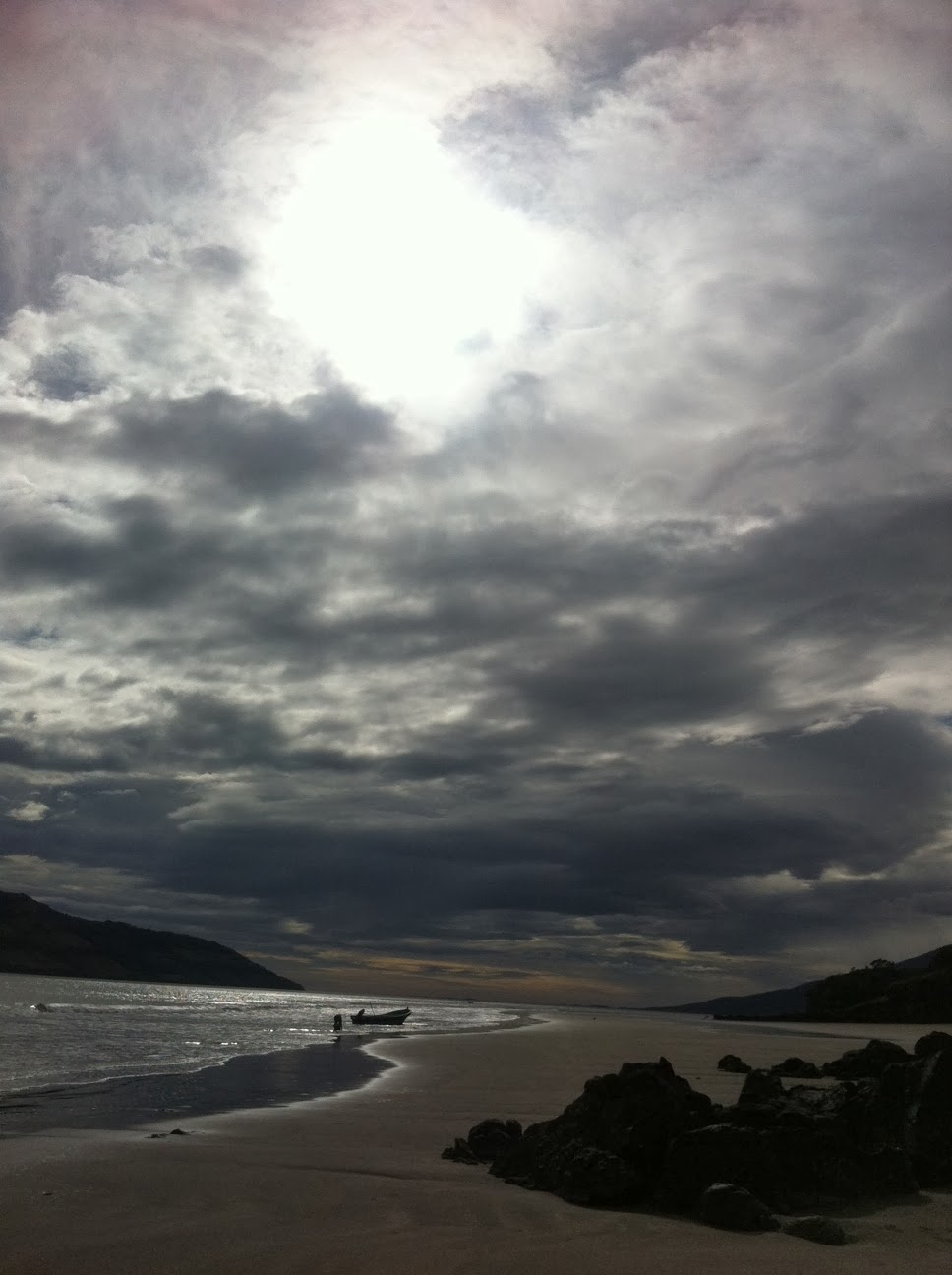 A beautiful view of what turned into a deadly storm.
The ride back was one of the most brutal and terrifying boat rides I could have imagined. Even the local captain didn't think we would make it. The boat lurched in huge swells nearly capsizing. I have no pictures because we were being pelted with cold salty water all the way back. I faced my imminent death as I know if the boat turned over I would not survive. This put a cold calm over me, anticipating my final moments, not such a bad way to go I guess and we certainly came to close too many times to count. Harry was in the back beside a water blinded captain madly bailing out the water filling up the back of the boat. We we lucky all that water didn't stall the engine 'cause that would have been the end. Ray was nearly flung out front eh front as the front of the boat rose and dropped 20 or more feet between swells. I never felt so happy to get home and get out of the boat onto the sandy beach, what a way to spend the day!
Posted by BUNNY at 12:52

You are a brave person. My friend Karla emigrated from El Salvador during the civil war. Someone close to me died a week ago, but I am still plugging away at this web design and writing an article for a newspaper in Ottawa.