today may it be put to rest (on May the Sith, as if May the Fourth wasn't enough, it is still STAR WARS celebration day the extended version) I am a complete NERD!

I decided to combine a few of my favorite things Media art and Animation (time lapse) Lego and Star Wars. I went to the Lego store in Chinook Mall (yeah, that's dangerous, I didn't even know we had a Lego store..............future addict right here, got myself a V.I.P card) It just so happened that they had a May the Fourth special on. They were giving away free Han Solo Lego figures with any purchase over $75 and there was a LEGO B-wing Starfighter (10227) kit on sale for 50% off. regular $250. Need I say more?! 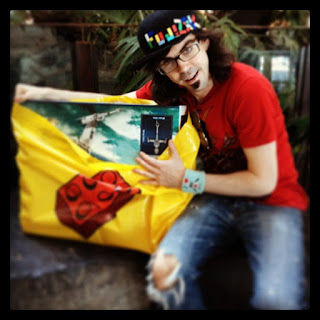 Here I am happy as a clam.

I time lapse photographed my Lego ckit assembly and post it on You Tube with some music, sorry no After Effects laser beams and light saber etc. added, that would be going a little too far! lol. =:D
I have access to some old VHS copies of the original Star Wars and watched episode V & VI back to back. while I put together the 1487 Lego pieces. Check it out below.
I was surprised when opening the box that it was just full of numbered bags full of pieces and also bags within bags. I remember older kits when I was growing up having vacuum formed plastic trays you can organize and fit the pieces into. I recycled all the plastic bags which is a great bonus. I am going to keep the box for future moves and maybe there is some value in it. The LEGO kit even came with a display stand. It has a bit of movement. The cockpit can fully rotate, so can the treads behind and you can change the angle of the wings. Its not stable enough to play with or let the kiddies handle. There were a couple of tough spots and some weaker attachment areas in the design, but all in all a real joy to put together. That is probably why it is a 16+ model. The design of the Starfighter in this kit is bigger in scale then regular kits, so the little Lego men are too small to sit in the cockpit so this kit does not come with any mini figures =;(  Good thing I have the free "May the fourth" bonus gift - Han Solo from Hoth. 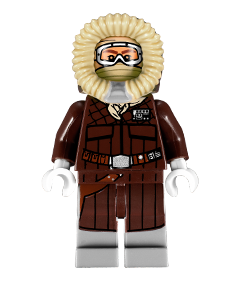 Lego instructions are super straight forward and easy to follow. There are no languages, just pictures and a couple of arrows.  This week-end Jess and I played a game where one person had the Lego instructions and the other person had the pieces. Its a great way to practice communication skills as well as being super fun. When I worked for the city one of the application tests was to work as a team giving instructions to another to put together a simple Lego kit. Pure genius! There are no names for the individual pieces so you have to get a system to do it well. I find it is good if you organize the pieces first then get your partner to orient the piece right and get it put together. This is my kind of challenge and its fun. Needless to say Jess and I were very successful in putting together our "cookies" and colored "thingies with __ (numbers) of bumps" correctly. 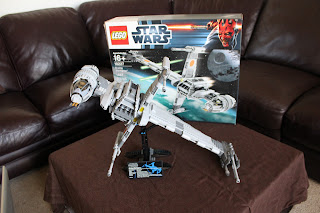 The B-wing took over 4 hours to completely build on my own. I love how the designer used the colors within. In the end they are completely hidden but makes for easy assembly. At about 1 am, after assembling all the B-wing Starfighter components, I began losing focus some of the smaller bits of the constructed pieces fell apart. This is the time to throw in the towel if you are smart. Battling it just makes it worse. I decided to go to sleep and repair it in the day with fresh hands and a fresh outlook. I shot the time lapse of construction of the stand before breakfast, it was a breeze. I took some finished shots of the assembled B-wing and did the post production. I outputted the image sequence from After Effects with a new orientation and scale and brought it into Final Cut to add the sound. I sped up Meco's 1977 record Galactic Funk 167% to fit the length of the video and outputted it to upload to my You tube channel for the enjoyment of other nerds on planet earth. Enjoy!

Here is the link to the you tube if you want it :D
http://www.youtube.com/watch?v=LFO56jrQLgU&feature=youtu.be

You are so cute and adorable. Sorry I missed you at Comic Expo. I walked through it twice but I didn't see you. The volunteers are nice, but they're a bit useless when it comes to giving directions. After an hour of traispsing through the exhibits, I gave up and went home.

damn. It was a blast, I was suited up as a pirate making the most fun of it I could..... Guessing cosplay costumes wrong on purpose to upset the nerds. lmfao!