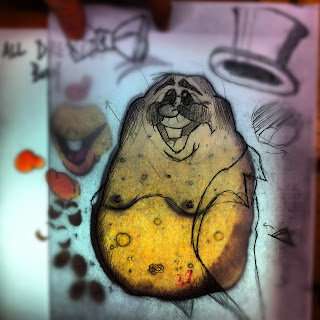 I've been slaving away all the while on finishing up an animation project I've been on for quite a while now. It is enough to make my hair grey.  Then while rendering out a test shot at lunchtime today................

Enmax blew the electricity while they were working a block away!
I would have taken it as a sign to eat (ie SNACK TIME) and have a snack myself, but I couldn't heat  anything up. 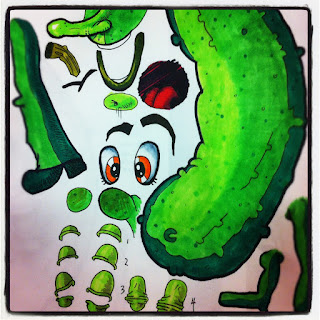 Since I haven't posted about it while I've been at it the last week, here is where the process has taken me so far:

I drew a bunch of stuff based on my storyboards.
I colored and created parts to be individually moved like paper cut outs.(see examples)
These drawings were scanned into photoshop and each drawing was digitally cut out and placed on a transparent background.
I imported over 100 of the individual drawings into after effects and began constructing timelines for the animation and assembling the puppets together.
I'm creating a bunch of long scenes with many moving parts and layers to tell the story as described in the treatment and storyboards.
After I test, time and render everything out of After Effects, I will then add the backgrounds and audio track consisting of individual sound effects synced to the visuals and a soundtrack. This will be done in my trusty Final Cut Suite.
The final part will be to output it and burn a playable DVD. 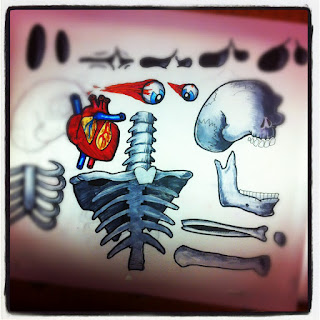 The beauty of Adobe After Effects is the way you can do just about anything in terms of animating visuals. It may get complicated but I just have to keep remembering to stick to the plan and not get lost getting mucky with crazy additional visual effects and stuff. 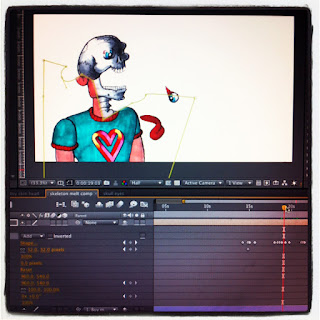 I have to have the entire piece edited to sound and burned to DVD with a report by September 15. No exceptions!!!

Animation is by no means quick and easy so the next week is not one I am really looking forward to! Keep wishing me good luck, my fingers are crossed!
Posted by BUNNY at 13:31