THE PARADE WAS DEFINITELY FESTIVE!

A group of friends and I took part in the parade, we were lucky enough to the tail of the event.  We followed a fantastic band, the music made it magical.  Not only did we have a blast and make new friends but at the end the honourable Mayor Naheed Nenshi was accommodating enough to allow us to get a photo with him just before he had to leave. 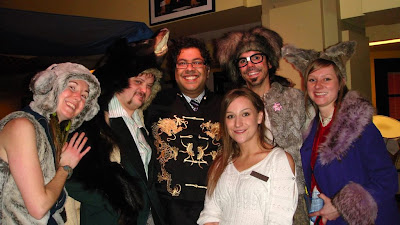 (Photo by Doug Wong)
from left to right: Audrya 'the fox' Corbett, Ray 'Bear' Kruger, Mayor Nenshi, Asya 'the organizer' Barker, Brian "Bunny" Batista, Karilynn 'wolf riding hood' Thompson.
There were tons of photographers on route and a live video stream on the High Performance Rodeo website <--(click this link for more info) during the event. Like the Pied Piper, the parade attracted many followers. The quiet riot at the Hyatt was the only low key portion where many onlookers in the +15 system were not shocked by the surprise. 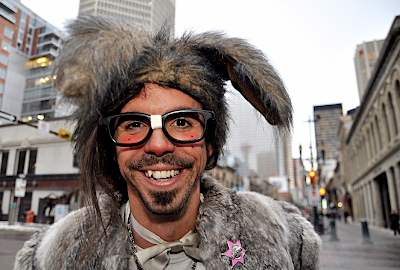 This photo was taken by photographer James Tworow of me on the outdoor portion of the parade where I was also photographed with a beautiful Sikh couple in their wedding garb. Congratulations and blessings to them. All and all it was an amazing way to start off the week-end. Let me tell you I am not one to  "kiss and tell", but it has already been a phenomenal week-end for me!
Posted by BUNNY at 22:54

Looks like a lot of fun!!! Love those outfits!